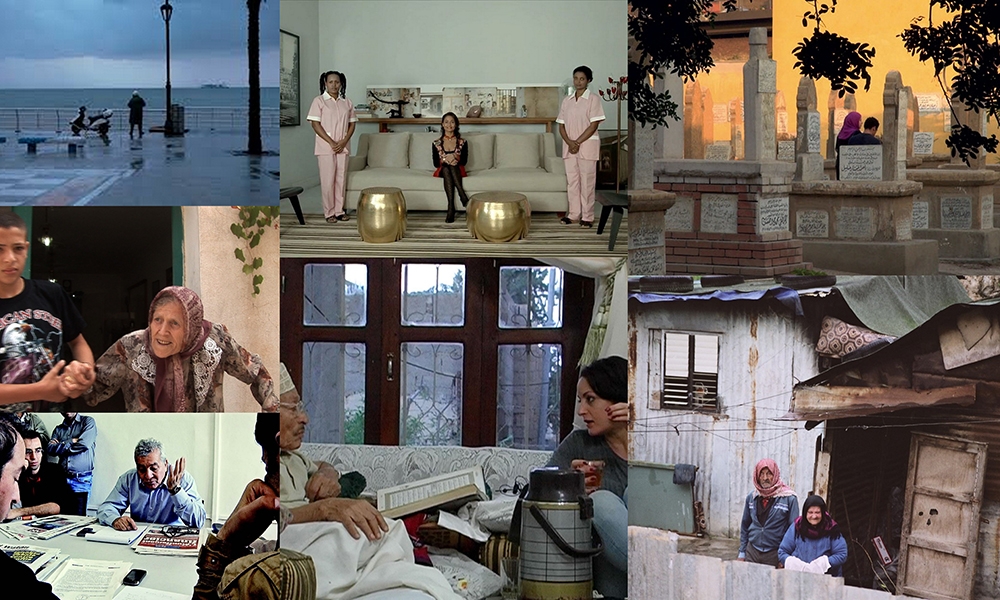 AFAC “Screens and Streams” Week 5: A Special Edition of Jazz and Performances
30 Apr 2020

The fifth week of AFAC’s “Screens and Streams” initiative of free online films and music unfolds this April 30, which also marks International Jazz Day. A special edition was therefore devised, with full jazz albums and online concerts as part of an exceptionally rich program, which also proposes a selection of theater performances that were previously recorded and are made available online.

In celebration of International Jazz Day on April 30, the “Screens and Streams” music program features this week five full albums of jazz music on both Anghami and Spotify: Donna Khalife – Hope is the Thing with Feathers; Hussam Aliwat – Born Now; Sary and Ayad Khalife – Soobia; Yacine Boulares - Abu Sadiya; and Ahmed Nazmi – Shams. While the films are available for up to 7 days, the playlists of previous “Screens and Streams” weeks will remain available throughout the initiative’s duration. Furthermore, extracts of concerts from AFAC-supported music festivals are made available online: Mahrajazz Alternative Jazz Festival (Palestine); Visa for Music (Morocco), Arabesques Festival (Morocco), and Global Week for Syria (Syria). The links to these festival concert extracts are available in the full program below.

Another new addition to this week’s special edition is an offering of five online dance performances and theater plays, which complete this week’s rich program: “Hip Hop Gees”, by Palestinian choreographer Amir Sabra; “Glass” by Syrian director and playwright Oussama Ghanam; “The Second Copy: 2045” by Moroccan artist and performer Youness Atbane; “Sisilah” by Rezodanse (Egypt); and “Above Zero” by Osama Halal (Koon Theatre) from Syria. The performances’ synopses and links can be found in the full program below.

A Maid for Each | Lebanon (2016)
Directed by Maher Abi Samra
Domestic work is a real market in Lebanon, segmented according to the national and ethnic origins of the workers and in which the Lebanese employer is master and the worker the property. Zein owns a domestic worker agency in Beirut. He arranges for Asian and African women to work in Lebanese households and assists his clients in choosing "mail-order" housemaids that will best suit their needs.
Advertisement, justice, police are on his side. Director Maher Abi Samra places his camera inside the offices of the agency with the full complicity of its owner. Diligently, unobtrusively, he observes and probes.
Film available for one day only on May 5.
WATCH HERE

Checks and Balances | Algeria (2016)
Directed Malek Bensmail
From the heart of an independent newspaper in Algiers, the legendary daily El Watan, this documentary film raises the issues of freedom of the press, editorial decisions, past and current events in Algeria, state authoritarianism, terrorism, Islamic fundamentalism, the issue of language, and the drive and bravery of some to confront and reveal what many would rather keep hidden.
WATCH HERE (To view "Checks and Balances",  go through the Vimeo on Demand procedure - 100% discount will apply.)

Roshmia | Syria (2014)
Directed by Salim Abu Jabal
Since 1956, 80-year-old Yousef has lived in a shack in Roshmia Valley with his wife Amna. Life is quiet until the municipality of Haifa endorses a new road project across the valley which will result the demolition the shack. Aouni, who looks after the couple, acts as a middleman between them and the municipality; negotiations lead to tension among the three characters.
Film available for one day only on May 4.
WATCH HERE

Birds of September | Lebanon (2013)
Directed by Sarah Francis
A glassed van roams the streets of Beirut, home to the filmmaker's camera that explores the city behind the glass. Along the way, several people are invited to share a personal moment in this moving confessional. Each one comes as a face, a body, a posture, a voice, an attitude, an emotion, a point of view, a memory. Their confessions are true, blunt, and intimate. However, soon enough, the vehicle empties again, and roams Beirut; restlessly looking for something, for someone.
WATCH HERE

Emwas..Restoring Memories | Palestine (2016)
Directed by Dima Abu Ghoush
The film follows the journey of the director, Dima Abu Ghoush, as she rebuilds her demolished hometown, Emwas, in the form of a maquette (model).
Dima was born in Emwas, but she was forced to leave it when she was only two, along with the village’s inhabitants, on the second day of the 1967 war.
WATCH HERE (Password: gaza1965emausnew)

As If We Were Catching a Cobra | Syria (2012)
Directed by Hala Abdallah
In newspapers around the world, comic strips may cause laughter or inspire thoughts. They may also lead to court cases or even death, making them an excellent gauge of a nation’s freedom of expression – particularly in the Arab world. Through the works of artists in Egypt, Algeria, Syria and Palestine, this documentary offers an extraordinary look at the evolution of freedom of expression in the Arab world, revealing the hidden side of these cartoons in a time of unprecedented upheavals.
WATCH HERE

The Mulberry House | Yemen (2013)
Directed by Sara Ishaq
Sara grew up in Yemen to a Yemeni father and a Scottish mother. As a teenager, she became increasingly suffocated by the constraints of her surroundings, and at age 17, finally decided to move to Scotland, where her mother now resides. Her father, however, would only approve under the condition that she would not forsake her Yemeni roots - a promise she made, but could not keep.
Ten years later - 2011 - Sara returns to Yemen as a different person, geared up to face the home of her past and reconnect with her long-severed roots. But against all personal expectations, she returns to find her family and country teetering on the brink of a revolution.
Film available for 3 days only – from May 4 to 6.
WATCH HERE

Mahrajazz | Palestine
MahraJazz is an annual alternative jazz festival, the first-ever Palestinian music festival to take place in Haifa (Palestine). It aims to break geographical and mental borders through diverse music and conversations. Watch video recordings of the 2019 edition through the two following links:
https://drive.google.com/drive/folders/1yj1aEhvhiRBaREjzNYZkPtxf4VZOy5xT?usp=sharing
https://drive.google.com/drive/u/1/folders/1YBC-0x9049sEBzItyhHNdJ4C_Zm66eT0

Dendri - Stambeli Movement (Tunisia)
An extract from the Dendri concert during Visa for Music 2019. Dendri specializes in an almost extinct North African music style called Stambeli, a spiritual ritual around which a whole mythology is built. The band intends to record an album of Stambeli and document this unique traditional music for future generations.

The Tune (Korea)
“The Tune” is a nomad band based on traditional Korean music. Here is an extract from “The Tune” concert at Visa for Music 2019

Arabesques Festival | Morocco
“Festival Arabesques” aims to encourage the visibility of the Arab artists and to promote dialogue and cultural diversity in Europe. Here is the link to the live concert of Faraj Suleiman, held in September 2019 in Arabesques

“Hip Hop Gees” (2018) | Amir Sabra (Palestine)
Hip Hop Gees dance performance addresses the Palestinian citizen and his/her suffering in the current restrictive situation with continuous violations of land and humanity. The show reflects an intellectual space where an attempt is made to present the life of the Palestinian through dance, with the struggle for freedom at its core.
WATCH HERE

This project is based on the desire to question the link between objects and fiction.

It is a man who will become two men to mutate into a fictional character, developing into a documentary and transforming into a way of perception.

“Glass” (2015) | Oussama Ghanam (Syria)
Damascus in the final year, beautiful, fragile and transparent like glass. In a small house inhabited by a family of three, four destinies intertwine: the mother that refuses the present in the name of the past, the daughter refuses it in the name of all things fragile, the son refuses it in the name of contemporary cinema. In order to face this ambiguous present, to escape it, to indulge in it, the family invites a “realistic” young man for dinner.
WATCH HERE (Password: 123)

“Silsilah#5” (2019) | Rezodanse (Egypt)
Silsilah Dance Program is an educational program targeting a group of 15 to 20 young adults aged between 18 and 25 years old from Alexandria, with or without previous background in dance. The program provides them with a comprehensive training in dance over a period of 6 to 8 months. It will consist of a training session, a creation process, and a performance on stage.
WATCH HERE

“Above Zero” (2015) | Osama Halal – Koon Theater (Syria)
On war, fear, emigration, and longing, “Above Zero” is a dance performance bringing together 8 dancers and 4 musicians, telling a Syrian tale, set to the rhythm of shelling and gunfire, within a space as large as a tent in a refugee camp. The performers are seeking answers to the questions of human life in times of war. They start with the works of the German Bertolt Brecht, and those poetic approaches to the German experience, to go beyond the Syrian local story and into the depth of humanity.
WATCH HERE