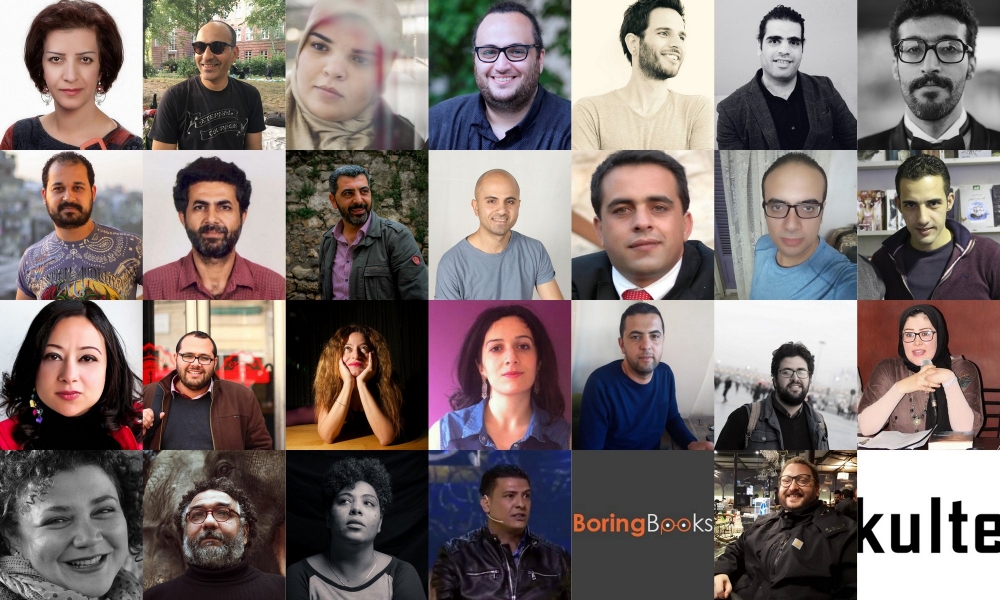 The Arab Fund for Arts and Culture – AFAC is pleased to announce the twenty-eight recipients of its 2019 Creative and Critical Writings grant program, launched in 2018.

The Creative and Critical Writings grant program’s call opened on February 11th and closed on May 7th, 2019 with 164 applications received from 15 Arab countries - a marked increase of 40% in the total number of applications as compared to the 2018 cycle. Another stark feature is the geographical representation which this year included three new countries (in comparison to 2018): Bahrain, Libya and Mauritania.

The selection of the 28 grantees was made following a full two-day jury meeting in the AFAC office in Beirut, deliberated by the 2019 jury: Ayman A. El-Desouky, Chair of Comparative Literature at the Doha Institute; Rana Issa, Assistant Professor of Translation Studies at the American University of Beirut; and Sinan Antoon, Iraqi poet, novelist and scholar.

Following the discussions and selection, the jurors issued the following jury statement:
“The committee was pleased with the creative richness of the presented projects in general and with the diversity of their orientations and aspirations. The committee also sensed in the applications a deeper and more complex understanding of Arab cultural spheres and their plural identities, and perceived the presence of critical feminist discourse that was not limited to female participants only, but included various social and conceptual frameworks. The committee noted the prominence of certain specific topics and concerns, such as children’s literature, cultural history, archiving, documentation and the deconstruction of collective memory in view of critiquing political realities. The impact of revolutions and their unfolding, and of civil wars on the experience of daily life and social struggles was evident. The committee also noticed the effects of wars and dictatorship on the demography and maps of cultural production.
The applications pointed to an interest in visual language, in the interactivity of media and in crossing and blurring gender identities. They also showed the effectiveness of workshops and group work in opening spaces for cultural exchange with society at large.
Noteworthy to the committee was the interest manifested in the registers and function of language, and in translation as theory and practice. Also noted was the inclination among participants of both genders to look into emerging, non-mainstream local cultures.
The committee noted on occasion a discrepancy between the maturity of theoretical propositions and the inadequacy of methodology or application. The committee encourages theoretical boldness based on the materiality and specifics of a given phenomenon rather than the imposition of ready-made theories on practices and realities. An example of this discrepancy is manifest in the case of children’s literature, where ideological and pedagogical concerns override the artistry of the text and the esthetics of writing and illustration.
The committee hopes that upcoming cycles will feature a wider participation from other Arab countries, whose intellectual and creative output was not reflected in the current cycle. And this in order to open up opportunities for competition in a way that guarantees the interconnectivity and integral representation of Arab cultural spheres and geographies.”

As mentioned in the jury statement above, this year’s applications addressed a variety of topics, including marginalized people and communities, women and feminism, wars and the political, social and economic realities in the Arab region, the diaspora, the relationship of the person to the world and to himself/herself, the hero and the anti-hero, myths and popular cultures. More specifically, critical writings’ projects focused on the study of novels as a genre in different approaches (language and narration style, historical periods, geographic distribution…), children’s literature, and general literary issues.

Among the 28 selected grantees, 7 are previous recipients of AFAC grants, while 21 are receiving support from AFAC for the first time; 8 are female writers, in addition to 2 institutions. Among the individual grantees, 6 are emerging and 19 are established writers.

The 28 Projects Selected by the Jurors:
A Clay Like Pottery by Ahmed Salah (Egypt)
Boring Books and Turjoman by Boring Books and Turjuman (Egypt)
Chocolate Covered by Maher Raii (Syria)
Dance of the Persecuted by Nora Amin (Egypt)
Despite Being a Regular Wiretapping Task Why Was "Elamin Ghareeb" Shocked and Chilled? by Walaa Fathy Hassan (Egypt)
Diaries of a Poet at Law School and Another Stupidities by Maïss Alrim Karfoul (Syria)
Interpretations by Abed Alrahman Shabaneh (Palestine)
History and Cultural Memory Forum by Fouad Halbouni and Ismail Al-Bahhar (Egypt)
Marginalized Visual Arts in Tunisia: Caricature, Comics, Book Coverts, Postage Stamps, Movie Posters by Mohamed Abdelmoula (Tunisia)
Maybe Tomorrow by Soukaina Habib Allah (Morocco)
Monsters Come Every Tuesday by Anas Abu Rahma (Palestine)
Oum Kalthoum Pop Art by Mohamad Houjeiri (Lebanon)
Representing War, Revolution and Exile in the Arab Novels Published Between 2010 and 2019 by Nawal Alhalah (Syria)
Secret Histories: The Stories of Three Prominent Egyptian Women by Wael Abdel Fattah (Egypt)
Six Qiblahs for Prayer by Amira Badawy (Egypt)
Sons of the Sea by Mohamed Salem (Egypt)
Sound as a Tool in Modern Arabic Poetry by Ahmad Katlesh (Syria)
Tales of Departure & Partings by Rasha Azab (Egypt)
Ten Failed Attempts to Commit Suicide by Ahmed AlSadek (Egypt)
Theater, Cinema and TV-Drama in Syria: A Historical and Critical Analysis 1970 – 2019 by Wael Salem (Syria)
The Day of The Monkey Rumpus by Ayman Al Zorkany (Egypt)
The House of the Beast and the Ghost Maker of the Dolls by Houssein Almoreey (Syria)
The Language of the Virtual Reality Novel by Amr Elazaly (Egypt)
The Literary Negative by Haytham el-Wardany (Egypt)
The Seventh Gate by Kulte Editions (Morocco)
Two Stories on Panicking Masculinity by Muhammad El-Hajj (Egypt)
Videos from Hell by Ahmed Shawky Hassan (Egypt)
You Know You Want It: Representation of Desire and Normalization of Sexual Violence in Egyptian Mainstream Cinema by Salma El Tarzi (Egypt)