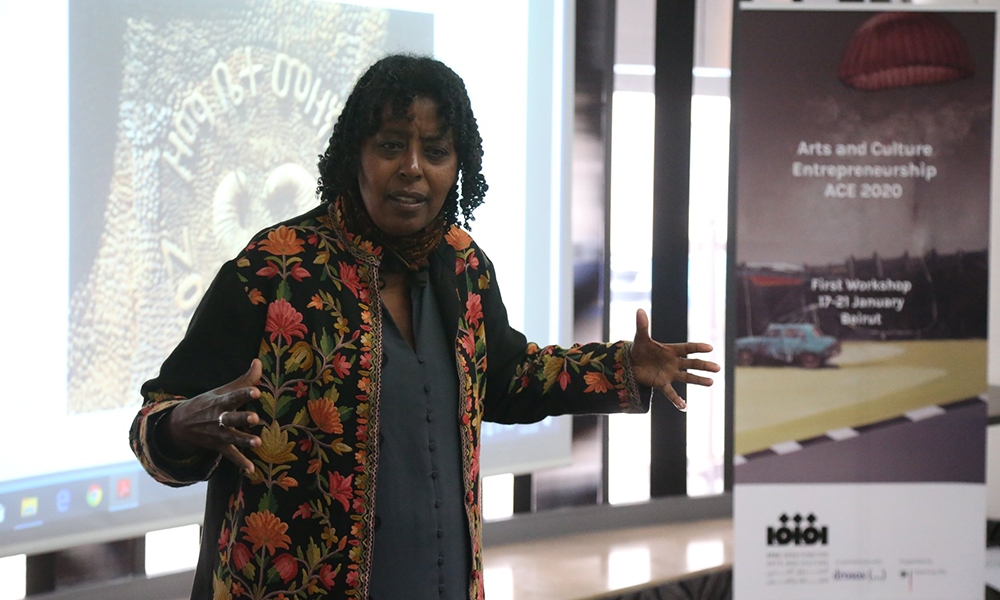 The Arab Fund for Arts and Culture – AFAC and Drosos Foundation have the pleasure to announce the eight cultural institutions from seven Arab countries, which will take part in the third cycle of the Arts and Culture Entrepreneurship (ACE) program.

The ACE program was launched in 2018 in partnership with Drosos Foundation and with the support of the German Foreign Federal Office, and currently embarks on its third cycle (2020-2021). ACE aims to explore new models for sustaining independent arts and culture entities in the Arab region. Each cycle comprises three workshops, a tailored mentorship scheme, and culminates in an incentive grant that allows the participating institutions to implement an innovative activity inspired by their learning during the program.

ACE is based on a process of nomination which was launched in May 2020. AFAC solicited the nominations of 36 individuals and institutions that possess wide knowledge of arts and culture institutions in the Arab region. Out of 76 nominated institutions from 15 Arab countries, 37 expressed interest in applying and 33 effectively applied by the deadline of August 20, 2020. Following administrative check, 28 applications were submitted to the jurors for evaluation.

This year’s jury committee comprised communications expert and cultural consultant Neila Tazi (Morocco); AlFanar’s Investment Director Fadel Zayan (Libya); and cultural manager Mohammed Abdallah (Egypt). Over the period of one month, the jurors reviewed and evaluated the applications in preparation for the two-day jury meeting which took place virtually. The eight institutions selected by the jurors are reflective of those that stand the best chance to benefit from a program like ACE. Commenting on the overall context, the applications and the selection process, the jurors issued the following statement:

“Our committee convened at a time of precarity and disruption; when physical, mental, and emotional encounters were but faded memories. The persistent pandemic has uncovered deep inequalities within our societies, as swaths of populations have been left exposed to the harshness of a locked-down economy. The cultural sector has been no exception–when the art economy’s working-class of artists and practitioners were first to be crushed under a disrupted wheel of cultural consumption and the ensuing recession, rescue packages were imperative.
And then came Beirut’s blast; in turn exposing decades of corruption that rendered expendable all lives and livelihoods in the city. Already dominating our thoughts, our colleagues in Beirut invited us to take part in selecting the participants of the third edition of ACE.
The applicants illustrated the width and breadth of the Arab cultural landscape; hailing from the Gulf to the Ocean. Some were from long-standing institutions with impressive track records, while others demonstrated vision and maturity far exceeding the few years of experience behind them. The latter group astonished us with their resilience, their capacity to surpass the depression of failed revolutions, and their persistence on finding a path while navigating a reality of displacement, injustices, and disease.
We proudly present the eight entities participating in the third edition of ACE. In making the final selection, we did not pick only the best applicants, but those we believed would benefit from and contribute most to both the program and to their peers. Our selection represents a cross-section of Arab cultural society, with organizations both rooted in their community, but also with clear aspirations of entrepreneurship. This latter element was especially important in light of the global pandemic and its inevitable economic impact, as we hoped to bring together organizations with an honest desire for change and sustainable growth beyond the simple focus on fundraising.
Finally, there were many great applications and some were desperately unlucky not to make the final list, but we sincerely hope that they persevere and re-apply next year. To all the amazing applicants, we wish you all our very best.”

The selected institutions hail from across the Arab region: Egypt (1), Libya (1), Morocco (2), Palestine (1), Lebanon (1), and United Arab Emirates (1), and Yemen (1) and are active in the fields of Film, Performing Arts, and Publishing in addition to multidisciplinary activities.