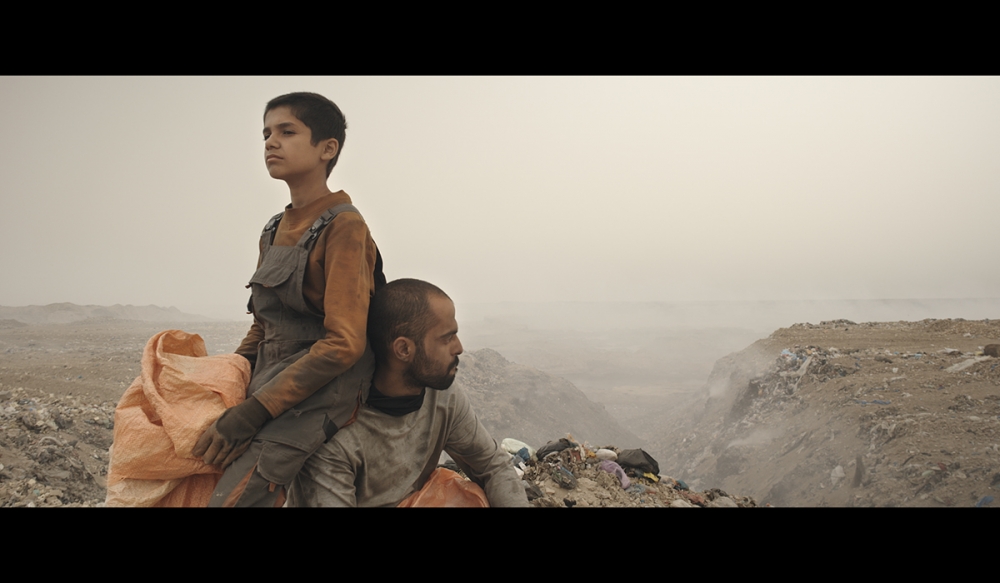 Al Daradji’s film focuses on the dumps of Baghdad, known as the “hanging gardens,” following the journey of 12-year-old Assad, whose life as a garbage collector is changed when he finds a sex doll amid the refuse. Banished from his family house for presenting the doll as beautiful, Assad makes a home in the hanging gardens, but things become morally complicated when the boy realizes the doll can speak and sees her potential for sex work as his ticket out of poverty. Eventually, Assad is made to grapple with the exploitation that is of his making and that which is all around him.

"I dedicate this film to the Iraqi women of the hanging gardens," Al Daradji said in accepting the award in Jeddah last week.

Muhamed Bashiir Harawe’s Will My Parents Come to See Me won the Silver Yusr Short Film award. The film pulls back the curtain on the bureaucracy of the death penalty, focusing on a young Somali man’s last day before being executed. Up against the film’s formalism shines the humanistic question of the boy, who wants to know if he will see his parents one last time.

Egyptian director Lotfy Nathan’s Harka focuses on the story of Ali, a young Tunisian man who makes a precarious living selling contraband gas. He is forced to take on greater responsibility for his family when his father suddenly passes away. The first challenge will be how to avoid the threat of eviction that suddenly befalls the household, forcing Ali to make difficult decisions. Nathan won the Silver Yusr for Best Director, and Harka’s lead actor, Adam Bessa, walked away with the Silver Yusr in a leading role for a male actor.

Adila Bendimerad, the lead actress in Algerian filmmaker Damien Ounouri’s debut feature, The Last Queen, took home the Silver Yusr for Best Actress. Set in 1516 Algiers, the film tracks the Berber republic’s struggle for emancipation from Spanish rule by courting pirate allies. However, King Salim Toumi’s bid for help backfires when the infamous pirate Barbarossa turns on him and seizes the city for himself. When Toumi is killed, Algiers’s queen, Zaphira, sets out on a plot for revenge against Barbarossa.

Five other AFAC-supported films participated in different sections of the festival, and four others took part in the Red Sea Lodge mentorship and training program.

The film festival’s favorites section featured two Palestinian films: A Gaza Weekend by Basil Khalil and Alam by Firas Khoury. Moroccan director Yasmine Benkiran’s Queens was screened as part of the Arab Spectacular section, and the New Vision section included Fragments from Heaven by Moroccan director Adnane Baraka and After the End of the World by Lebanese director Nadim Mishlawi.

Four additional AFAC-supported projects-in-progress took part in the Red Sea Lodge mentorship and training program: She Was Not Alone by Hussein Al-Assadi (Iraq), Concrete Land by Asmahan Bkerat (Jordan), Hounds by Kamal Lazraq (Morocco) and The Mother of All Lies by Asmae El Moudir (Morocco).

Check out the full program on the festival’s official website.