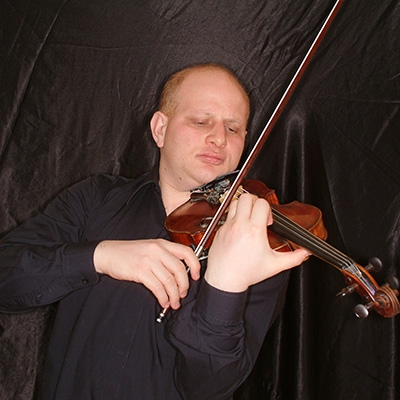 [email protected] | www.ashraf-kateb.com
Syria
Ashraf Kateb is a Syrian-German violinist and composer.  His work is driven by a passion for promoting musical culture and conserving Arabic music heritage.  Ashraf was born in Aleppo, Syria, and studied violin at music academies in Aleppo, Moscow, Berlin and Cracow.  He has lived in Berlin since 1992. Ashraf has participated in many international festivals, and was the only Arab artist in the Philharmonia of the Nations. He has performed with many music celebrities, including Justus Franz, Leonard Bernstein, Lord Yehudi Menuhin, Sir Gorge Solti, Mistislav Rostropovitch, Igor Oistrakh, Gidon Kremer and others.  He is also working for many years with sopranos Anna Maria Kaufmann and Deborah Sasson.  Since 1997, he has been promoting a pioneering international project titled, “Arabic Music and the World.” He collected, performed and spread the works of leading Arab composers, endeavoring to share with the world the works of creative Arab musicians.  He produced his first CD, titled, “Gesture,” in 2001 accompanied by the Syrian-German pianist Gaswan Zerikly. The project was a great international success and a unique work of art in the history of music, presenting the violin and piano works of seven Arab composers from Syria, Lebanon, Egypt and Morocco.  Ashraf performs concerts throughout the world with various musicians.  In October 2009, he was awarded the Silver Shield of the City of Aleppo, presented by the Mayor and Chairman of the City Council, in recognition of his efforts to promote musical culture.   In October 2010, Ashraf released and published his new CD "Dia Succari, composer from my Aleppo" funded by the city of Aleppo and other NGO’s, where he has recorded the complete works (22 Pieces) for violin and piano of Syrian Composer Dia Succari accompanied by 22 pianists from 21 different nations.  In 2015 he was the music director and one of the composers for “Intima”, a fusion of visual art, dance, and music. Intima investigates themes of selfdiscovery, conflict, loss and resolution. The cultural history of Syria, ranging from the Gilgamesh epic to the current, tragic war, inspired the work, from producer Tayeb Al-Hafez of Al’Myra Communications.  Ashraf composed music for “Wit-ness,” a multi-media project grounded in performance art. It features film, photolithographs and burned paper works of the Macedonian Artist Igor Josifov. The project’s film poses the question, “Who is really watching whom?”
related projects
Arabic Sonatas
• Music  • 2016  • Syria