Imagining the Future: The Arab World in the Aftermath of Revolution 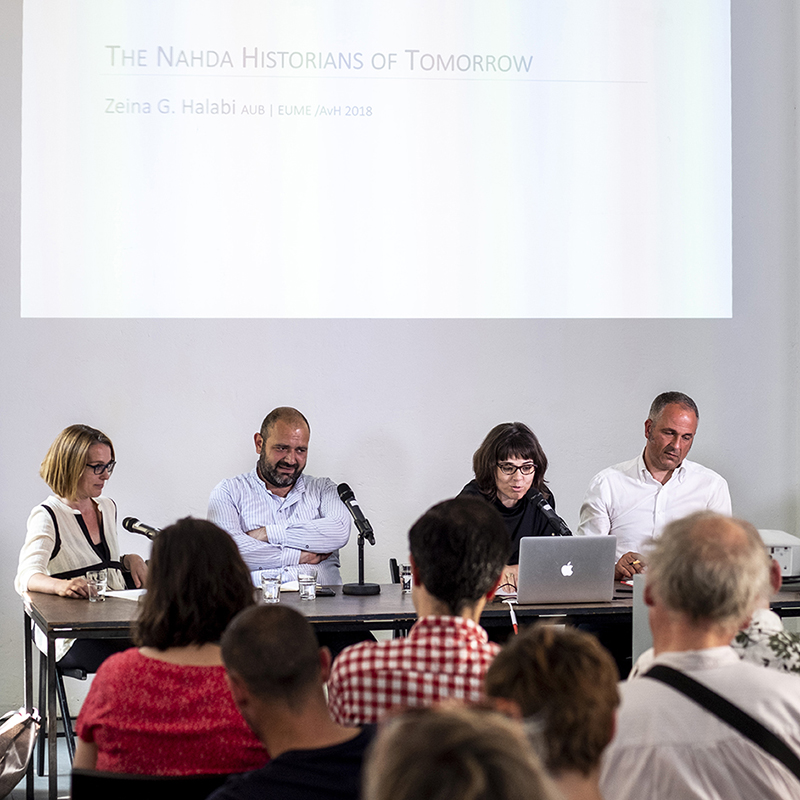 The surge of counter-revolutions, the stepping up of mechanisms of internal repression, compounded by the active intervention of international powers in the aftermath of insurgencies in the Arab world have caused tremendous material and immaterial damage. Such setbacks do not only impact the present moment, but they also inhibit imaginings and representations of the future, particularly for artists, writers and activists. It is difficult to uphold the same imaginings of the future that had prevailed prior to the Arab revolutions and that regarded dictatorships as merely a phase destined to lapse as time moved forward. Although these aspirations materialized in many cases, they have not revealed new horizons. Indeed, the aftermath of revolutions seems to pull down the curtain on a political era that once conceived of a bright future.

After the revolutions were defeated, motifs of dystopia in literature and art have begun to emerge. Whereas science fiction, comics, and creative writings continue to enable imagining the unimaginable and unveiling horizons for better morrows for some, it invited others to delve into deeper level of despair. Has dystopia become a fount for intellectual and artistic production? Are we to relinquish the very idea of a future carrying promises for betterment and bliss? Or, on the contrary, should we hang on to the notion of utopia as the harbinger of a future for all? Does the moment of the Arab uprising still allow us to conceive of such utopic futures? If this is indeed possible, how do contemporary imaginings compare with those that the generations of the 1960s carried, or even those of the modernist pioneers of the turn of the last century?

This Forum will take place in Berlin and will explore these questions by looking at the new literary and artistic forms in the Arab world, in which "the future'' is represented or incarnated.

"Imagining the Future: The Arab World in the Aftermath of Revolution" is a forum organized by the Arab Fund for Arts and Culture (AFAC), in the framework of its Arab European Creative Platform (AECP) In partnership with the Archive Kabinett and Europe in the Middle East - The Middle East in Europe (EUME)

Our Present, or How their Future Was Imagined
2:15 pm: PANEL DISCUSSION
Zeina G. Halabi: The Nahda Historians of Tomorrow
Sonja Mejcher-Atassi: Imaginary Futures of (Auto)biographical Writing: Telling Life in Jerusalem and Baghdad
Orwa Nyrabia: Amiralay, the Future is in the Detail
The panel will be moderated by Georges Khalil

Our Future, Present
4:00 pm: PANEL DISCUSSION: Can Literature Foresee the Future?
Nael El-Toukhy: The Future Need Not Be Smart, It too Can Be Foolish
Haytham Al-Wardany: Notes on the Necessity to Overcome the Future
Mohammad Rabie will read a chapter from his novel Minisecures
The panel will be moderated by Elena Chiti

5:45 pm: SCREENING and DISCUSSION
Artist and filmmaker Maha Maamoun will screen three short films, 2026(2010, 9 minutes, Black and White) and Night Visitor: The Night of Counting the Years (2011, 8 minutes, Color) and Dear Animal (2016, 24 minutes, Color). A discussion with Wael Abdelfattah will follow the screenings.

7:00 pm: SCREENING and DISCUSSION
Artist and filmmaker Mahdi Fleifel will screen his short film, I Signed the Petition (2018, 10 minutes, Color). A discussion with Rasha Salti will follow the screenings.

A Farewell to Utopia?
2:00 pm: PANEL DISCUSSION
Leyla Dakhli: Imagined Futures of the Past: On how Utopias Circulate
Judith Naeff: Beirut's Suspended Now
Samer Frangie: Revolutions After the Future, or the Impasse of the Present
Panel moderated by Jens Hanssen

SCREENING
Artist and filmmaker Larissa Sansour will screen the Sci-fi trilogy, A Space Exodus (2009, 6 minutes, Color), Nation Estate (2012, 10 minutes, Color) and In the Future, They Ate from the Finest Porcelain (2015, 29 minutes, Color).

Animation, Comics and Representations of the Future
6:30 pm PRESENTATION
Rasha Chatta: An Archive for the Future? Syrian Comics and the Visually Real

SCREENING
Artist and filmmaker Fadi Baqi will screen his short film Last Days of the Man of Tomorrow (2017, 29 minutes, Color)

The Arab European Creative Platform (AECP) is a pilot multi-disciplinary program of events, showcases, conferences and workshops, that aims to address alarming realities in Europe, namely the growing ranks of displaced creative talents, and the rise of xenophobic and reactionary movements. Launched in 2016, the three-year program aspires to explore innovative and constructive actions, commissions and productions, because we are confident that establishing a platform that probes and explores imagination and expression, engages the creative and artistic communities from both Europe and the Arab world, holds keys to allaying fearful minds and hearts and shifting perceptions.
The idea is to not only to challenge terms of discourse and perceptions by providing a platform to Arab intellectuals and artists in Europe, but also to enable genuine contact and creative collaborations between Arab and European artists. Moreover, building on the success of AFAC’s public showcases, and responding to the difficulties Arab artists face with the circulation, visibility and dissemination of their work, the AECP is grounded in structured partnership with European institutions and funders to co-produce and co-present each event in the proposed program. Since 2016, we have collaborated with the Allianz Foundation, Alfilm, Archive Kabinett, the Berlinale, DokLeipzig, Documenta 14, DoxBox, Freiluftkino, Eiszeit Kino, the Heinrich Böll Foundation, Humboldt Forum, Volksbühne theater and the Weissensee Kunst-Hochschule (Berlin).

Archive Kabinett
Archive is a platform for cultural research and debate. It brings together activists and cultural practitioners in an adaptable structure with the aim to foster a unique space for discussion and exchange. Archive is engaged in a wide range of activities including publishing and exhibition making. Archive Books produces readers, monographs and artists’ books as well as journals focusing on contemporary cultural production and reception. Located in Berlin, Archive Kabinett is both a library/bookshop showcasing a selected range of printed matters, and simultaneously a space for lectures, screenings and exhibitions. Archive Journal is a cross-disciplinary journal primarily concerned with the notion of documentation but also with contemporary uses of translation and circulation. Archive Appendix is the design department that brings a conceptual approach to the relation between text and image.

EUME: Europe in the Middle East—The Middle East in Europe is a research program at the Berlin-based Forum Transregionale Studien (www.forum-transregionale-studien.de). EUME seeks to rethink key concepts and premises that link and divide Europe and the Middle East. EUME builds upon the previous work of the Working Group Modernity and Islam (1996-2006), the idea of “learning communities”, and the principle of “research with, rather than research on”. It allows for the invitation of 10 to 15 post-doctoral researchers every year, the organization of annual summer academies, workshops, regular seminars. So far more than 200 scholars have been EUME fellows.