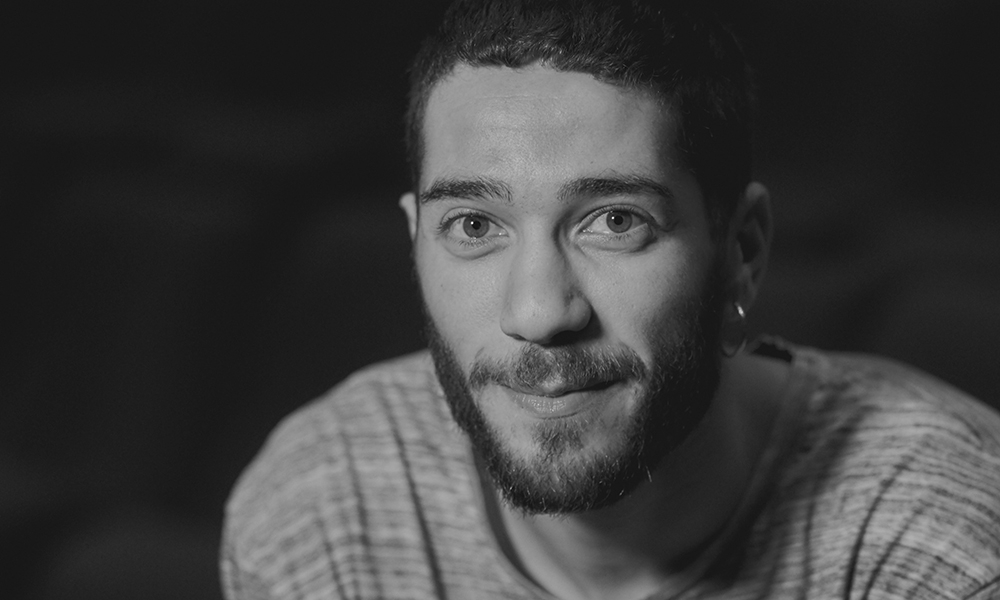 Casting the lens on young Franco-Algerian choreographer Tarek Aïtmeddour and his dance performance “Résister” which premiered in France last October, in this inspiring interview.

Before we get into the core topic, tell us more about yourself. You discovered dance in a peculiar manner. Could you elaborate ?

It is indeed true that my connection to dance is quite peculiar, based on the fact that I discovered it rather late… I started sports at a young age (8-9 years old), with judo. I practiced it for 10 years, and I eventually grew to love it. Stepping back, with age and maturity, I discovered that it was beyond a sport; it was a philosophy. It is a very respectful, wise and philosophical sport. The force that generates from it, the connection and contact with the other body resulted in the fact that I greatly appreciated this discipline; it educated me.
At age 16-17, I stopped judo and prepared myself to join university to pursue a bachelor degree in history. On campus was the National School of Dance of Créteil, which offered once a week, every Friday, a 1.5-hour dance class with a certified teacher. I attended once with my friend, and this is how it all started. The teacher told me she would be ready to help me in every way she can, to make a career out of dancing. And that was it – an absolutely wonderful story. I told her “I am almost 20, it seems to me that it is too late, even though it has been my secret dream since ever; not to mention that it will cost a lot of money, will displease my family… it seems to me that it is impossible”. It turned out however that nothing was impossible. There I was, applying to this prestigious school in Paris, the International Academy of Dance, where I undertook week-long auditions, in dance but also in theater, music, etc. Not only was I accepted, I also received a scholarship, which allowed me to attend this prestigious school for free. This was the turning point of my career; of my life. It has been 10 years now, that I adopted dance as my profession. This is how my story started, which is quite incredible, but it all boils down to judo, which, today, helps me tremendously in dancing; as much in spiritual thought, in the way of approaching things, as in the energy of the body, in my connection with other bodies, how I hold female bodies while I dance, when I work on manipulation techniques, etc. Judo taught me a lot.
It is an atypical journey, yet I believe nothing comes by chance; everything eventually moves in the same direction. It came at a high price, though. It cost me my family, who did not accept this choice. My family was already suffering from instability. My parents got divorced when I was 15. So when, at age 20, I started dancing, there was a total rejection, a sort of denial, even from my brothers and sisters; which led to the fact that I have no connection with some members of my close family today.

You are Franco-Algerian, and you reside in Paris. How do you maintain links with the Algerian scene?

I was born in Algiers from Kabyle parents, and lived there until age 5-6, after which my parents moved with us to France, directly to Paris, so that we settle and pursue our studies. Following the troubles with my parents, I did not return to Algeria for 10 years. Then I reconnected, following my parents’ divorce, around age 16, at the occasion of my sister’s wedding, as well as other occasions. This allowed me to regain my connection to my roots and culture, which were fundamental, up until today. I visit once every two years. It is this minimal connection with my culture, of which I am an intrinsic part and that substantially inspires me, that I am proud of.
As I do not consider myself just Algerian, nor just French, I could immediately, in my personality, cultivate both. It is much easier to say that today with regards to France, since I have been living in Paris for the past twenty years. Nevertheless, I keep this Arab/Oriental heritage by continuing to visit my country, by being inspired and proud of my art that navigates between the Orient and Occident. I would very much like to consolidate my work in France since this is where I live and where I have the most advantages and tools. Once this is achieved, I would love to travel across the Arab world and try to share my work, as this is where I drive my inspiration from.

Speaking of inspiration, with “Résister” you interrogate the relation between oneself and the other, as well as the desire for emancipation, and to free oneself from the other’s gaze. What inspired you ?

My inspiration, in general terms, comes from everything: music, books, the news on television, an encounter in the metro, the stars – I am very inspired by astrology… In addition to our cultural, social, historic, demographic and geographic heritage. When I started writing the “Résister” story, inspiration came precisely from these human questions, of what differentiates us from the others. And in fact, not much does, as opposed to what unites us. I needed to write “Résister” as a cry for help, or an emergency cry, a breath; something that exults and explodes, calling for unity. “Résister” is fundamentally a love message. I wanted to redefine this idea of differences between us, of genres, sexualities, genders, colors, skins, etc. There was also a Greek connection, reflected by the white dresses worn by all performers. This was not random.

Movements loaded with tension, jerky yet fluid, repeated gestures, dislocated movements, which culminate in a final moment of harmony and sensuality. We have the impression in “Résister” that each of the 8 dancers are alone with themselves, yet at the same time form one unit with the others. As if their bodies wanted to convey a message , a nervous yet passionate message, a body language that questions. Tell us more.

It is true that built-in within the construction of “Résister”, are foundations of love, hope, and faces of resistance. To achieve this, I had to feed my performers, guide them. It is very communal and communicative. They act and speak in the name of one and the same cause.
However, intrinsically, I asked them to never forget themselves. Unity creates the group; it was very important for me that each could speak for him/herself, and exist. Every member needs to exist, for the group to exist. It would have been incoherent, contradictory and hypocritical, to talk about love, hope and messages of unity and resistance, if from the inside, I was asking the performers to eclipse themselves. Thus, we talk of group and collectivity, yet we also talk about the individual. They are all very different, and I was trying as much as possible to cultivate this difference, this force of singularity within each, in order to eventually combine it and express it within the group. This is very important in my view as it is a message that reflects, very simply, one of society’s shortcomings, where not everyone can have the same chances, shine in the same way or be punished equally. We do not have equal chances on this planet – let alone within the same country. We are not born equal. In “Résister”, one finds a somewhat utopic statement, an attempt to regain human simplicity and fraternity.

“ Résister” was successfully presented at the Theater of Nevers (France) on October 26, 2019. Were the reactions and first impressions of the audience up to your expectations ? And have you had the possibility to include, within the audience, and as initially planned, persons with special needs and other specific audiences?

Let me start by addressing the first question: yes, “Résister” – the video, which represents the genesis of the work – was posted on social platforms and reached two million views. This is extraordinary, for a dance video. This led us to the construction of the choreographic piece itself, which we managed to create and present on October 26, 2019, at the Nevers Theater. We presented the performance, and the result was beyond expectations. The atmosphere, the emotions and feelings were very present, within the team in the show, which in turn reached the audience: everyone was glued to their seats, in an almost precious, respectful silence which, after the one-hour performance, turned into warm applause. Subsequently, the theater management invited me to perform one of my new creations (“Le Bal”) next year, on March 12.
With regards to the second question pertaining to the public, we have been working on mediation projects with the company, offering interventions in EHPADs – “Établissements d'hébergement pour personnes âgées dépendantes”; establishments for aged persons – around the theme of resistance, in Lyon and Biarritz (south of France), to work with an inclusive dancing school; or with art therapists who invited us to work with dancers suffering from Down syndrome or autism.. We indeed worked in those various aspects; for us it was logical, coherent and even highly important that this performance be inspired from this, and accessible to these publics. It goes without saying that at the night of October 26, everyone was invited; there were aged persons, children, everybody.

The role of music is primordial in your performance. The music pieces are powerful, repeated, very different, and function as separators for the scenes, yet leave a feeling of awkwardness within the spectator, which is probably intentional. Could you reveal this musical «strategy » to us?

My connection to music, beyond “Résister”, is fundamental.
I was already in love with music as a child. Until today, music plays a fundamental role in my choreographic work. While working on “Résister”, I told myself that I wanted something different. I knew I already had a base, since I had worked on the bases of Vivaldi’s classical music for the video. It is a frantic, nervous music. However something was missing. I was not going to create a one-hour performance on classical pieces from Antonio Vivaldi. I wanted something new, something creative. Plus, the Arab touch was evidently missing. This is where Jasser Haj Youssef comes in. A very talented artist and a friend, he created the music for “Résister”.
Jasser’s music, combined with Vivaldi’s, was a perfect combo to offer a magnificent accord between baroque and Arab music, in order to convey this secular message about transcending borders and reaching fraternity.
It is very true that the music pieces are similar yet different, and cut the scenes or canvases. The performance represents one hour-long whole, articulated into four parts. These four parts were inspired by seasons. In the right order, in “Résister” we first dance summer, followed by autumn, winter and spring. It is an accelerated view of life, a page that keeps turning, at the rhythm of the seasons.

What in your view characterizes the contemporary dance scene in the Arab region?