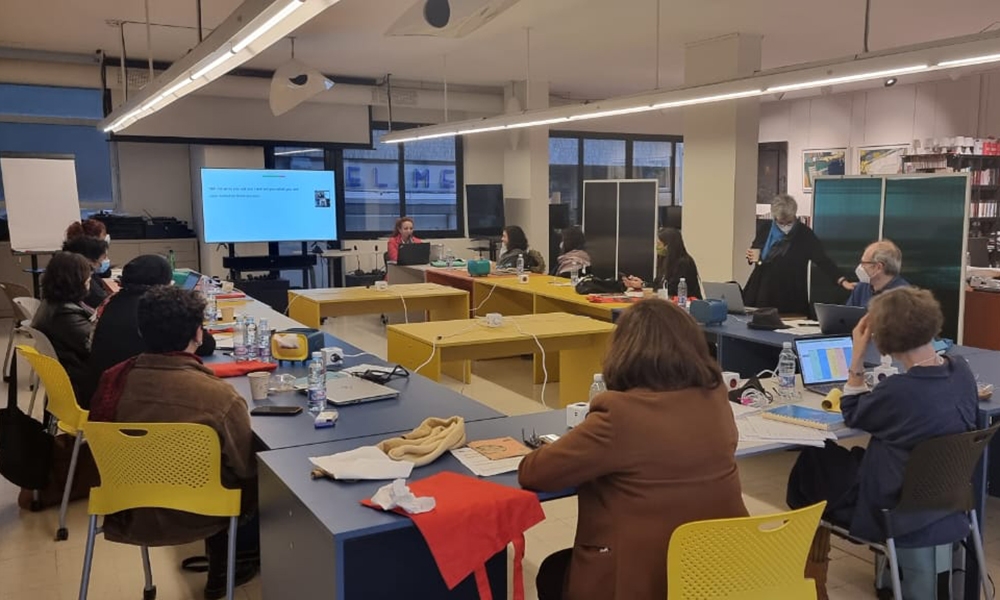 The group of five grantees (three individuals and two teams) from the 2021-2022 cycle of the Research on the Arts Program (RAP) convened in a workshop at Fabrika in Beirut on February 9 and 10, joined by the five RAP jurors as well as the AFAC and the Arab Council for the Social Sciences – ACSS management and grants teams.

The workshop’s first day kicked off with the presentation of research projects by the grantees. In “Paintings’ Stories: the Forgotten Route”, Egyptian academician Eman Abdou digs through the forgotten stories linked to the history of modern Egyptian paintings, retelling history through stories and their location, creating routes of forgotten narratives of modern painting in Egypt. With “Hawran, as for the Rest of the Country”, Jordanian art curator Reem Marji tries to read into the music of Hawran and its relationship to reality and politics in the region. On their part, the Egyptian team represented by Mai Alwakil and Nour ElSafoury explore, in their research project “How We Write”, how critics, who write about contemporary visual art from the Arab region, have found their bearings amid the structural, political, social and technological changes that have followed the end of the Cold War. The second team, represented by Bahia Shehab and Huda Abi Fares, addresses through their project “A Genealogy of Women Design Pioneers: Graphic Design from Southwest Asia to North Africa since the 1950s”, the work of a vital and diverse group of women from the region. They establish a foundation of women role models to inform the design and research community at large about the wealth and social significance of these design pioneers. A culinary finale, the last research project, “From the Archives: 100 Years of Culinary Ephemera”, led by food researcher and filmmaker Salma Serry, surveys, analyzes, and digitally archives 100 forgotten historical cookbooks and ephemera such as menus, food packaging, food businesses’ receipts, posters and ads, as well as store signs from Southwest Asia and North Africa.

The second day of the workshop opened with an insightful discussion, led by the RAP jurors, titled “Thinking About the Arts”. The jury committee members discussed topics of burning relevance to arts-based research, such as the interlinkages between the arts and social research; the importance of archives; accessibility of arts to communities, etc.

Following this panel, the individual researchers and teams met in individual meetings with the jury committee members. Methodological and conceptual issues were discussed during these one-on-one encounters. Empowered by the rich debates and constructive critical discourses of this workshop, the five grantees will now proceed with their research endeavors.