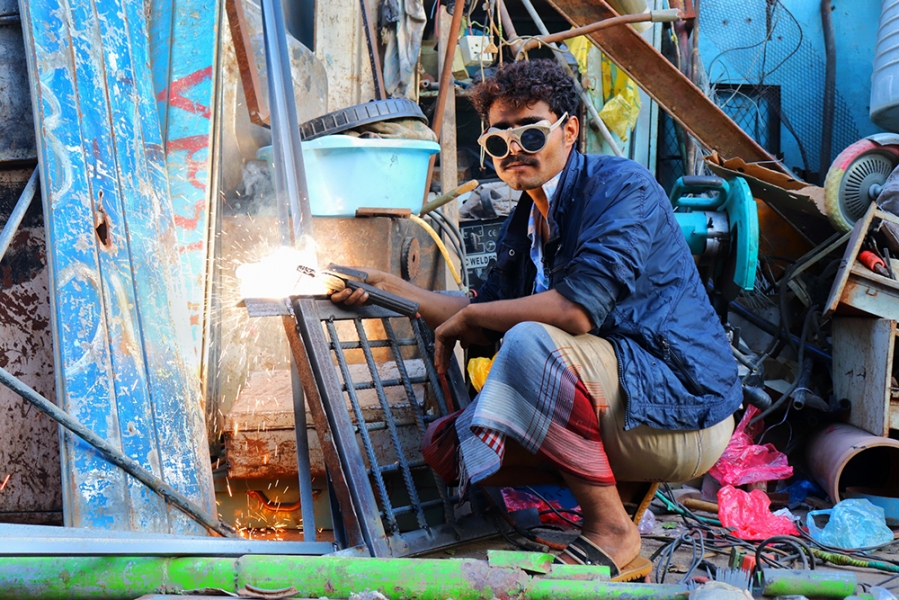 The selected photographers will receive a production grant and will benefit from two intensive workshops, as well as a 6-month mentorship program to support the development of their individual projects under the supervision of the program’s mentors: Randa Shaath, Peter van Agtmael, Tanya Habjouqa, and Eric Gottesman, accompanied by the program’s coordinator Jessica Murray.

The ADPP call opened on February 15, 2021 and closed on April 30, 2021 with 82 applications received from 14 Arab countries. Out of all the projects received, 75 passed the administrative check and were sent to the jurors for evaluation.

A jury committee composed of three members was invited to review and evaluate the applications in view of selecting the projects most eligible for support. This year, Lebanese photographer Dalia Khamissy joined as juror, in addition to Magnum Foundation director Kristen Lubben and Iraqi photographer and journalist Ghaith Abdul-Ahad. The deliberations that took place virtually over two days, resulted in the selection of 11 photographers hailing from Palestine, Egypt, Jordan, Lebanon, Libya, Syria and Yemen.

Commenting on the proposed work reviewed and those which they selected, the jury issued the following statement:
"We were impressed by the wide range of topics covered in the 75 applications we reviewed. We saw projects that spoke directly about global issues that are playing out in the region, and classical topics for documentary photography: migration, urbanization, and conflict. But we also saw many others that explored issues in surprising new ways, often indirectly: feminism, harassment, patriarchal societies, economies, youth questioning the future, oppression, water, art, health, queer issues, history, archives. Particularly in the context of the pandemic, many documentary photographers turned to intimate issues within the home or even within the self.
We also saw stories from exile, which is such an important part of the narrative of the region. There was good gender diversity among the applicants, as well as an interesting mix of photographers who were self-taught and those who had received formal photographic education.
The eleven projects we selected are reflective of the pool of applicants as a whole. While each of us weighted projects differently according to the review criteria, we arrived at shared conclusions based on extensive dialogue about each and every application received.
We were drawn to projects that focused an important story through a new or surprising lens, such as talking about displacement and urbanization through the lens of the photographer’s grandmother.
In other cases, very strong work was not selected if the jury decided that it already seemed complete and was not in need of the extensive mentorship that is the strength of the Arab Documentary Photography Program. We were pleased to see more applicants from Palestine this year, and in future years we’d like to see more from the Gulf, Iraq, and Yemen, which were underrepresented in this year’s applications."

The applications received for the 2021 cycle cover a range of personal, social, environmental and political issues. On the one hand, stories about identity, personal struggles, gender issues, family, and motherhood are shared, coupled with projects exploring cities from urban and social perspectives and others tackling global environmental issues such as climate change and water shortage. On the other hand, a significant number of applicants reflect on war, displacement, exile and migration.

Looking at the applicants’ statistics, the ratio of male/female applicants for this year is 60%/40%, compared to 61%/39% in 2020. This ratio is reversed on the grantee level with 45% males and 55% females. Furthermore, the current cycle registered an increase in the percentage of seasoned photographers among the pool of applicants, from 57% in 2020 to 63% in 2021. This is explained by the program’s growing reputation for addressing the lack of learning opportunities for documentary photography in the region, as well as helping create and sustain networks.

The work of the eleven selected photographers span across a rich diversity of topics such as personal, gender, and social struggles, urban development and socioeconomic constructs, as well as war and its impact beyond the battlefields.

In “Baby Pigeon”, Lina Khlaid (Jordan) captures her journey before and through the painful process of battling cancer with a series of self-portraits exploring and reconstructing a body at war with itself, while Doaa Nasr’s (Egypt) “Suspended Until Further Notice” documents the life of young women during the pandemic, a period mostly marked with fear and anxiety. In “Two Cities”, Ghayyan Al Amine (Lebanon) travels between Beirut and Doha, gravitating towards the darkness in both cities as an attempt to consolidate his life torn between the two, whereas Ieva Saudargaite Douaihi (Lebanon) is in search for the last patches of green in Beirut— “The Last Garden”, in a city that has almost completely evicted the natural world. Moving on to greater Cairo, “If I Move from Here I Would Die” by Mohamed Hozeyn (Egypt) sheds light on the impact of development and renovation processes on the social fabric of the city. As the city grows tall, his grandmother is forced to either buy an apartment she cannot afford, or leave the neighborhood. Another socioeconomic construct is mapped out in “Cairo - Back and Forth” by Ahmed Qabel (Egypt) who documents life on a third-class train carriage over several trips from his hometown of Ashmoun, to Cairo, and back. “Banished from Our City” by Aya Albarghathy (Libya) is a study of the photographer’s relationship to two cities— her own Benghazi that, as an unveiled woman, she gets to experience from behind the windscreen of her car, and its neighboring Tunis, where she can stroll the streets freely. In the Delta of Egypt, “Misery of Soft Hands” by Mohammad Kotb (Egypt) documents the disjunction of labor and gender in the Delta, by following a group of young girls working in red brick factories. Reflecting on the effect of war beyond the battlefield, Nisreen Nader’s (Yemen) “Free Air” documents the difficulties of daily life in a Yemen ravaged by civil war and its impact on people’s mental health, while Ameen Abo Kaseem (Syria) questions his memories and tries to make sense of his past, present and future, through “My Short-Term Memory”. Finally, “A Quote from Hell” by Samar Abu Elouf (Palestine) investigates the cases of children disfigured and injured by ad hoc solutions created to contend with basic and daily power needs in a Gaza under siege.

To find out more about the ADPP and its photographers’ works, check out the ADPP website.