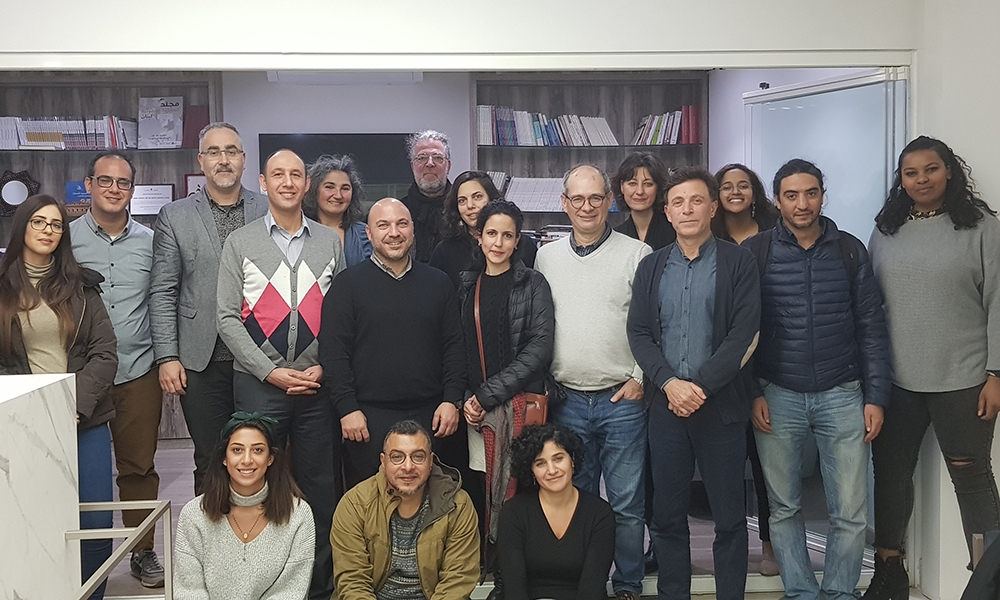 The Research on the Arts Program (RAP)- a joint program by the Arab Fund for Arts and Culture (AFAC) and the Arab Council for the Social Sciences (ACSS)- convened a workshop in Beirut on January 4 and 5, 2020, bringing together the recipients of the 2020 grants’ cycle and members of the jury committee.

The workshop was held at the ACSS offices and aimed at providing a forum for the selected grantees from five Arab countries (Sudan, Morocco, Lebanon, Tunisia and Egypt). Grantees had the opportunity to engage in critical debates and receive feedback on their research topics in open discussions with fellow grantees as well as during one-on-one meetings with RAP jurors including Walid Sadek, Jack Persekian, Maha Maamoun, Tarek El-Ariss and Driss Ksikes.

Presentations by grantees were followed by a dynamic discussion between the researchers and the jurors around art as form of disruption as well as critical approaches and paradigms for the study of the arts. Researchers were challenged to look into dynamics that link the art with other sectors and strongly encouraged to disseminate their findings to the public. In addition, the RAP grantees benefited from a session on Research Ethics in the Social Sciences delivered by the ACSS team.

The participating research projects exhibited a high potential to contribute to a wide array of debates on arts - music, performing arts and cross disciplines - and politics in the Arab region. For example, in its research project entitled “Memory of Sounds and Music, Ma'amal El Sukkar St. 18”, the Egyptian research team led by Yasser Naeim seeks to unearth the cultural memory of the 1980s in Egypt as epitomized by the different artistic engagements of residents in a building in Garden City - one of Cairo’s neighborhoods. Another in-depth attempt at archiving and documentation is “Traditional Performance Arts in the North of Morocco: Documentation, Study and Presentation of Developmental and Artistic Investment Prospect” by Moroccan researcher Jamal Abarnous. In his project, Abarnous seeks to map the panoply of performances (artistic, cultural and popular such as sports matches) in Northern Morocco. Another lens on the Moroccan artistic and cultural scene was presented by the research collective ‘Racines’ led by Aadel Essaadani. The project entitled “Arts and Power: Research on the Instrumentalization of Arts and Culture in Morocco”, interrogates the efficiency of Morocco’s cultural public policies. On their part, the Tunisian team of researchers led by Anas Ghrab undertakes a research project entitled “Arabic Sources on Music” and embarks on a digitization process covering the various types of Arabic music, seeking to make them available online via an existing digital platform. The remaining two research projects burgeoned from the heart of the revolutions shaking their respective countries.

“Artistic Action: Collective Notes” by the Lebanese collective LAAB (led by Jana Traboulsi), investigates the art practices of a Beirut-based group of cultural practitioners working in media and the arts. Members of the collective are concerned about the relationships that artistic and cultural endeavors bear on politics, taking the Lebanese uprising of October 17, 2019 as backdrop. Similarly, “Unpacking the #SudanUprising: Art, Artificial Intelligence & Grassroots Activism” is a research project by Sudanese institution Andariya (led by Omnia Shawkat) that aims to collect, document, publish and share empirical case studies and analyze data from 5 different Sudanese cities representing the highest and most dynamic artistic and grassroots activism that has influenced Sudan’s uprising.

The RAP scholars will convene again in early April to present their research projects during the ACSS Research Forum 2020. Stay tuned for more details.