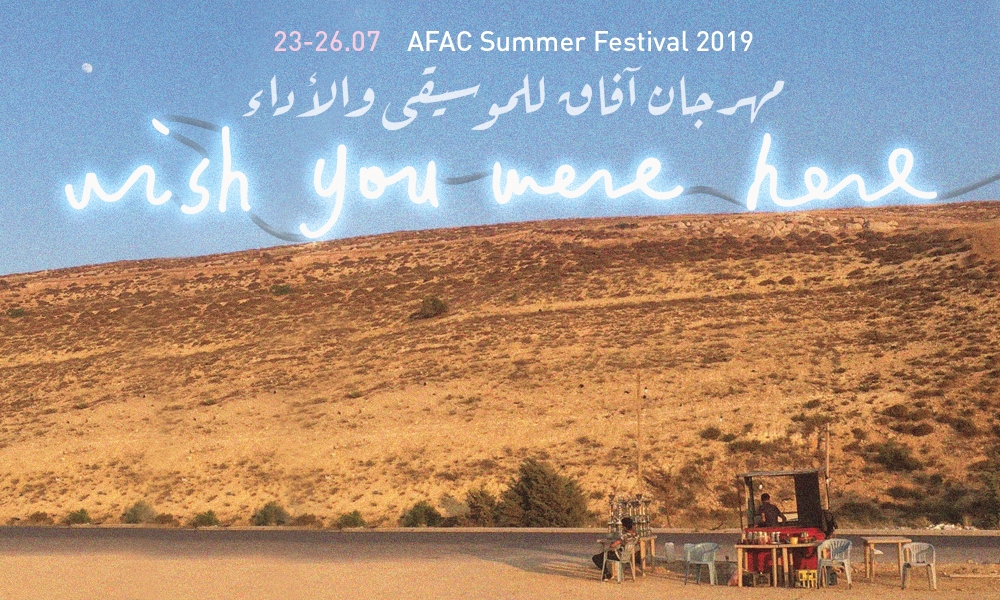 The Arab Fund for Arts and Culture – AFAC has the pleasure to invite you to the third edition of AFAC Summer Festival “Wish You Were Here”, taking place from July 23 to 26, 2019 at the Silent Green Kulturquartier in Berlin. The festival boasts a rich program of concerts and performances from across the Arab region, focusing this year on music and performances.

“Wish you Were Here” is organized in the framework of AFAC’s Arab European Creative Platform (AECP), and is held in collaboration with FLAX (Foreign Local Artist Xchange).

Ghosts of Meaning is a conceptual journey between transcending gender norms and neo-orientalist aesthetics. It examines stereotypes between islamophobia and self-orientallizing and asks, where does the Arab queer stand today amidst the globalized markets and commodified identities? It is a performative manifesto of a Trans-Orientalist Aesthetic expressed through live sound and dance.

In Sawt Out, Mazen Kerbaj, a Lebanese visual artist and graphic artist, also known as one of the initiators and key figures of the Beirut experimental and improvised music scene, collaborates with percussionists Michael Vorfeld and Burkhard Beins, both of them protagonists of the Berlin Echtzeitmusik, who have worked together in various formations over the past 15 years, including the trio Misiiki with Dirk Marwedel, the cross-culture ensemble Hanoi Berlin, Lotte Anker's Electric Habitat, and most recently for their audio-visual performance Klirrfaktor. The concert marks the release of their first album, also titled Sawt Out.

20:00 Performance: THE SECOND COPY, I LIKE THIS TITLE
Conceptualized and choreographed by Youness Atbane

The starting point for The Second Copy: I Like this Title was to explore how ideas and aesthetics bear their influence and build a performative dialogue, specifically around the notion of reproduction, the exhaustion of the copy and its lingering traces in the work. How can an action be repeated without being a copy? Adaptation, rewriting, rebuilding, diversion, reinterpretation are choices of reformulation that give legitimacy to the act of copying following the principle of cause and effect.

Archeophony is a turntable solo by Raed Yassin created from live mixes of rare recordings of ethnic music from around the Middle East, North and West Africa, South and South East Asia which are sampled alongside drum machines, synthesizers and electronics. The work acts as an archeological document of sound as well as a new experimental conductor of musical history.

A contemporary electro-pop musical and visual performance by Wael Koudaih and Randa Mirza that revisits the timeless golden era of Egyptian cinema, Love & Revenge pays tribute to the kitsch idols of an Arab world passionate in its dramas and melodramas. Borrowing its title from the 1944 musical melodrama Love and Revenge (in Arabic Gharam wa Intiqam) that cast Asmahan, a diva of film and song, and featured the Egyptian-Viennese waltz turned classic song Nights of Enchantment in Vienna (Layali al-Uns fi Vienna), the performance is embedded in the dramaturgies of the repertory of classics films, replete with motifs of lovers quarrels, redemption, dramas of abusive marriages and tragic destinies. It retells in hybrid performative form, stories of stars including Kadhem Saher (Iraq), Souad Hosni (Egypt), and Sabah (Lebanon), as well as stars from Cairo’s legendary film studio, Studio Misr, singing idols Leila Mourad, Farid el-Atrache, Asmahan and Oum Kalthoum, and queens of oriental dance, Samia Gamal and Taheya Carioca. Wael Koudeih’s remixes and Randa Mirza's visuals are joined by the bass of Julien Perraudeau and the electric oud of Mehdi Haddab.

Welcome to the astonishing land of N3rdistan! Guided by mystical tunes, unsettling text and compelling rimes, led by the charismatic Walid Benselim, N3rdistan elaborates a resolutely bold and unusual fusion between rock, trip-hop, electro, oriental-beat with world inﬂuences. The quartet mixes with ease digital power, traditional Arabic poetry (Mahmoud Darwish, Gibran Khalil, Nizar Qabbani, Nazek El Malaeka), ancestral song, intermingling here and there with melodies of a qanun and African keys. Without falling into the trap of ethnic electro, their fiery sonification is the engine that propels questions on the meaning of life or digital exile.

The Arab Fund for Arts and Culture - AFAC
The Arab Fund for Arts and Culture - AFAC was established in 2007 by cultural lobbyists as an independent initiative that funds individuals and organizations in the fields of cinema, performing arts, literature, music and visual arts while facilitating cultural exchange, research and cooperation across the Arab world and globally. Since its inception it has become internationally and regionally recognized, working with a range of reputable institutional partners, and has issued around 1,000 grants to date with about 150 new grants per year. AFAC is registered in Switzerland with headquarters in Beirut, Lebanon.

The Arab European Creative Platform - AECP
The Arab European Creative Platform (AECP) is a pilot multi-disciplinary special program of events, showcases, conferences and workshops that aims to address alarming realities in Europe, namely the growing ranks of displaced creative talents, and the rise of xenophobic and reactionary movements. The three-year program aspires to explore innovative and constructive actions, commissions and productions, because we are confident that establishing a platform that probes and explores imagination and expression, engages the creative and artistic communities from both Europe and the Arab world, holds keys to allaying fearful minds and hearts and shifting perceptions.
The idea is not only to challenge terms of discourse and perceptions by providing a platform to Arab intellectuals and artists in Europe, but also to enable genuine contact and creative collaborations between Arab and European artists. Moreover, building on the success of AFAC’s public showcases, and responding to the difficulty Arab artists face with the circulation, visibility and dissemination of their work, the AECP is grounded in structured partnership with European institutions and funders to co-produce and co-present each event in the proposed program.

FLAX – Foreign Local Artistic Xchange. A Network for Cultural Collaboration
FLAX is a network for cultural networking and collaboration, that promotes cultural exchange and cooperation for local and recently arrived cultural workers, artists and institutions in Germany. FLAX is open and accessible to all and does not exclude on the basis of national or ethnic affiliation, nor legal status It supports and organizes interdisciplinary and intercultural artistic projects. It also supports artists in developing their individual artistic practice, accessing university education, obtaining scholarships, residencies, workshops and furthering their cultural education. One of its strongest initiatives is a mentoring program established for artists and cultural managers, who are recently arrived in Germany from different parts of the world. A strong network presents a unique opportunity to nurture individual artistic growth and enable creativity and intercultural competency by bringing together people from different backgrounds and disciplines.