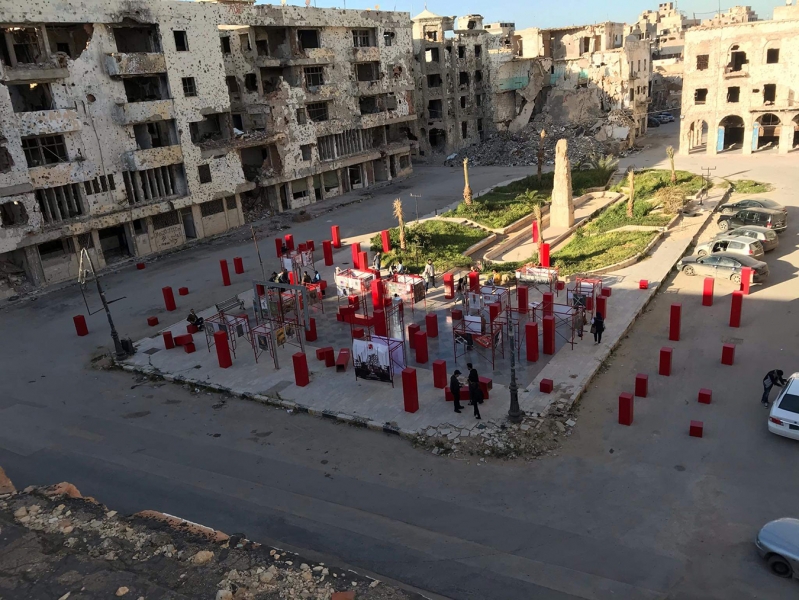 Your project Tahafut proposed a direct response to the incoherence (the idea of destruction and decay that shaped Libya through the wars and civil instabilities) that Libya continues to face culturally, politically and socially, through an outdoors experience that also emphasized the right to the city of Benghazi and the presence in public spaces. Tahafut aimed to explore the socio-political grounds and experiment with new ideas, the possibilities and chances that lay within that incoherence, and how to use it for theoretical art and architectural purposes. Can you tell us more about the project, and whether it fulfilled its objectives?

Tahafut is the Arabic translation of “incoherence”; we wanted to hold an exhibition program – it is considered a program because it started as a workshop, supervising the works of 15 participants– and making them critically oriented towards certain social, political and ideological issues in Libya. We were trying to keep it open; to not just have a certain political problem for example, but to have a critical attitude towards art and artistic representation. We targeted three main topics. The first topic was the issue of the destruction and reconstruction, and their interpretations. For instance, if there is destruction in the building environment, and we want to reconstruct this environment, what are the considerations of the destruction that is already happening or that happened in the political system, in the social system, in the cultural system, in the economic… and what are our responsibilities as artists and architects towards that?

The third issue was identity. Identity is a contested topic here (in Benghazi), and there are a couple of ideologists here that link it to the past, to a historical period, to be just traditionally represented, like how Libyans used to live in the past. Other ideologists stated that identity should be something that speaks to the present; that has a representation of the present, regardless of the past.

So these were the main topics. And the objective of the exhibition was to push – because we saw this initiative as one of the first in Benghazi; in Tripoli there might have been a couple of movements like that, but in Benghazi it was the first – and encourage young architects and artists to target a critical issue with a critical attitude.

They of course did their best, and they represented their ideas in their artworks; some were artists’ artworks, and some were architectural artistic works. We also had on the second day for example a discussion with artists, participants and the public, because it was an open space. Some locals came in, and we discussed these critical issues openly.

One of Tahafut’s dimensions is to create a positive incoherence. Can you tell us more?

Although we did not declare it as such, it could be one reading of it. Incoherence has two parts. The first incoherence is destruction as it is, like the distortion or decay of the living environment; the built environment or the social system, the political system, etc. The other part is deconstructing as a critical behavior; creating an incoherence in ideology; critiquing mainstream ideologies or socio-political power structures, like for instance the issue of taboo, or the traditional thoughts and their power and cruel applications that are practiced on women, for example.

What we also conceived as incoherence was to create instability in what we are used to think, or what is thought of in the mainstream as a norm, or as something powerful and stable. We aimed to present a critique that would create an incoherence in that power or in that system.

I think the incoherence that the event created is more of a conceptual incoherence, and instability, in the sense that it provoked many questions and also some people were passing and they were saying “no, no, don’t reconstruct anything!”, because of all the scaffolding. They thought that it was just another reconstruction project that was going to just ignore the locals’ needs and come up with something that is not coherent with the style of the buildings and area. It was therefore a conceptual instability, not a physical instability.

How was the community engagement with Tahafut at the level of the 3-day outdoor exhibition in a post-war public area? How would you describe Tahafut’s impact in the short and longer terms?

The overwhelming reaction from the public on the open space exhibition was a feeling of provocation. It was not very comfortable for the public, because there were a huge number of these red columns, and the red color in that gray context – because of the destruction and the ashes etc – was very contrasting, and provoked many questions. Why the color? Why this number of columns? And why the scaffolding? There were many questions.

Moreover, during the talks that took place with the public, we discussed freedom of speech, for instance, and to be critical of tradition, and the idea of traditional identity. There were also older generations, old people present in the discussion; and generally we didn’t receive a direct critical reaction to these topics that we discussed, but the participants in the discussion were very engaging, and they were also questioning with us the sort of things that we were laying out. However there were also a couple I think, two or three persons, who, following the discussion, came to us, and they were somewhat upset, because we were criticizing identity, criticizing the idea of tradition and were trying to fragment it, trying to encourage the right to exist in the city for all layers of society, and especially women’s accessibility. So some were suspicious of these, and there was an old man who came to us and was very upset because he saw us as radicals, and too critical.

So the impact I think was mainly a provocation, to reclaim the public space of the city, because I think it is hugely abandoned by civil society and the cultural sector. Everything is done in closed spaces. We wanted to go to the public spaces and address public issues freely as much as possible. And it encouraged a great number of people, they saw it as something liberating, like a step closer, since it was just an exhibition for 3 days, and then it sort of went away. But also one of the important reactions was that we should have had more public engagement. Because we did not promote the project in a way that would gather as many people as possible and we could have reached a greater number of locals. Locals did attend, yes, but not in a sufficient number compared to the people who came from the art scene, the elite in a way. Generally, all the people that came were around 200 per day, so 600 people for the 3 days, but the locals were like 60, representing a minimal percentage.

Do you believe that Tahafut and similar initiatives can push towards reclaiming space and creating a sense of belonging for the people of Benghazi?

This is something that we are trying to work on presently, and I think such initiatives could be a mechanism of change, if we are able to bring decision makers and officials into the discussion. People that are responsible for legalizing or legislating a building to be constructed, or an area to be built/developed. So these are mainly people from the Ministry of Urban Planning from the Municipality of Benghazi; these are the decision makers who allow something to be built or not. And until now, we have been away from those people, yet we have visions, ideas. We should therefore share these with them, and push for an application or actualization of these ideas. If we can convince them, when it comes to the architecture environment, that this should be a better option than that - for instance there is currently a project of reconstructing the Sports City in Benghazi, and it represented a question mark for us. The old city, which includes many areas demolished by the war, is still in the same condition, not reconstructed. And now there is this nearly commercial project of reconstructing the Sports City, for which the Municipality dedicated 1.2 million Dinars, completely abandoning the old City, completely abandoning all the destructed residential areas. This is one example.

What we should do is engage them in a dialogue. The project “Tahafut” had a workshop phase in the beginning, and the participants were meant to provide or work on proposals. These were mainly critical proposals, they did not propose a physical reconstruction, or a physical architectural project. They were mainly artistic critiques, but I think we could have instead, in another option, a workshop that would cultivate architectural projects and proposals to be then communicated with decision makers, and encourage mainly young architects to have their ideas communicated properly to these decision makers, hoping to discuss and actualize these visions and ideas. Instead of just ignoring the local architects, hiring foreign companies, just like they were doing with this Sports City project.

What are your future plans for Tahafut? You had initially foreseen a Tahafut 2, 3 and possibly 4. Do you still plan on taking Tahafut and its creative process to other cities in Libya?

Yes, absolutely; this was the original idea. In Benghazi itself, it was meant to be transferred to 3 places; it was supposed to move across 3 spots, 3 public spaces. These were public squares that once upon a time had protests and important public events that were concerned with public issues and general social, political and economic matters. But then, due to some unexpected weather problems, we could not hold it for more than 3 days. We had it on the first day in one square, in Al Kish arena, and then a strong wind came in and it brought the whole installation down. We had to move to plan B, which is just to have it in this place called The Silvium, where the project ended up to be. We then decided to hold it for 3 days only, in that place, because it was embraced by buildings, and winds could not come and affect the installation. That’s one part in Benghazi.

We are aiming to hold it in other cities in Libya. At the same time, we thought of this project as a sort of laboratory, because it had a workshop phase and an exhibition phase. We are planning to place it in the capital Tripoli, and also in the South, probably in Houn, thereby holding parts 2 and 3 of the project. What we are aiming to make differently, for these editions, is that the issue will be more specific to that certain location. So let’s say in Tripoli, there are definitely some issues that are specific to the Tripoli context, and if we hold it in the South, there are also some specific issues. The first version was not narrowed down to Benghazi; it was a very general call. But then we thought if we place it somewhere else, we should make it more specific. And so we are definitely thinking of making a version 2, a version 3 and more of it.