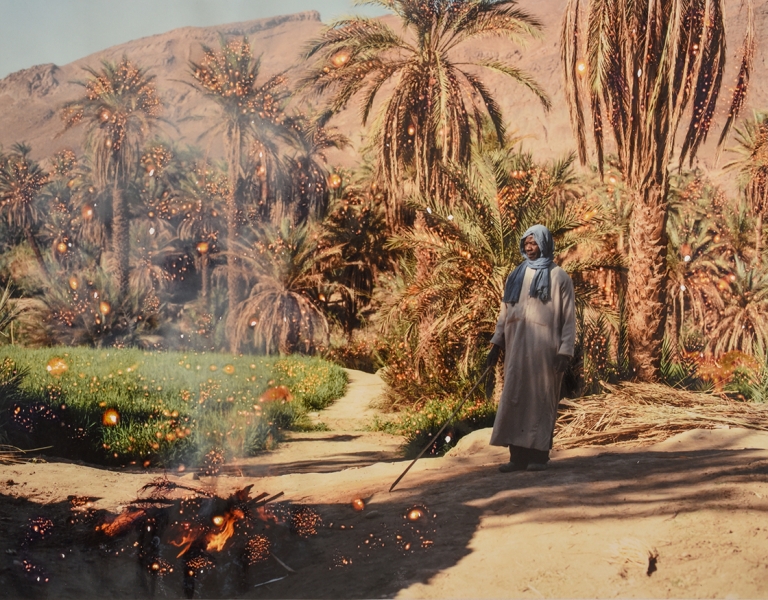 © Seif Kousmate
Degradation through Aesthetics and Poetry: An Encounter with Seif Kousmate on “Waha”
06 Oct 2022

Your project “Waha” represents a quite peculiar documentation of the deterioration that you have observed of Morocco’s oases. What pushed you to use unusual techniques (adding external and organic elements to your photographs such as dried dates, dead skin from palm trees, soil, etc.) for your project?

With this project, I wanted to start working, for the first time, on the notion of the impact of climate change on territories. One of the first difficulties encountered, and all photographers working on the thematic of climate change will confirm, is that it is very hard to document the effects and capture them over time. One would need a benchmark, photos from the archives, which will allow one to have a global view on how the situation was before, so that the degradation becomes apparent. In my case however, these were not available, as the oases were very poorly documented.

So at first I started to go on site, I took a traditional documentary approach, and then I realized that I had not succeeded in capturing this degradation, and that what I felt on site was not transmitted in the images. My story was missing something.

So I took my photos, and started collecting materials on site. I also collected poems from the inhabitants, who wrote texts based on what they experienced in the past few years, namely the fires, the deterioration of these territories. One evening, I said to myself, I should maybe create a sort of communication between these elements and the photographs, to see what would come out of it. It was a new approach for me. I had never worked with this technique, I was just trying to convey the message, and to use the medium of photography to share this story I had witnessed, and felt, with the local communities. It started this way.

Afterwards, I saw that when adding layers to my photos, the message became more meaningful. At that moment, I decided to develop a metaphoric narrative of what was going on there. After that, I progressively started to think about the fire, which set off in the oasis on several occasions: how can I integrate it in the image? I started making prints, which I burned using different techniques, to see the results. At the end I reached a result that suited me. There was also the use of acid, to create a sort of parallelism with the industrial globalization that is affecting these territories, through acid rains, and negative effects on the ozone layer, etc. The acid, in my view, was a sort of metaphor for this industrialization. I therefore put some acid on the photos, I observed this degradation, and I utilized photography to try and take control of this narrative. In other words, I place my print, I put some acid on it, it starts to eat up the color pigments, and at this moment I take a photo of this stage, to try and stop the degradation in the course of time.

While constructing this story, I really accentuated the narrative emotionally. In other words, one connects to the oases via archives, what one knows from the oases, these Hellenistic territories Orientalized by images, films, and from there, move towards something much more linked to what is really happening, linked to this degradation, and to the message that the local communities wanted to convey; or at least what they conveyed to me, while I was on site.

Do you think you have maximized your impact with these techniques?

I don’t know about maximizing impact, but in any case, the story that I managed to tell is much more pertinent, I believe, than if it was done in a traditional documentary manner. It gave more meaning to my practice and for my story, to have a narrative to which different layers were added, using various techniques.

This technique allowed me to convey this degradation and to make it visual. The audience is therefore immediately connected to the story, and feels what is happening in these environments instantly.

The oases of Morocco host more than 2 million inhabitants and contribute to the economic and cultural development at the local and national levels. What was the effect of your documentary photography project on the situation of the inhabitants of the Moroccan oases who appear in your photographs? Do you think you managed to put in motion a process of transformation or preservation?

I would say it is too soon to tell; this part of the project was finalized in June 2021, and I am still working on the second and third parts, on other territories, which I have not fully explored yet. One of my objectives however is to bring back these works to these territories and to launch a debate with the communities who told me their stories and daily lives, and to try to establish a dialogue and open the debate around this work. Afterwards, we could potentially invite political figures, who propose solutions, and associations to develop solutions. I don’t have solutions myself; my role is mainly to open up debates and create conversations around my subjects, and I hope that this will bring about change one day.

What are your plans for the distribution and promotion of your project? Are there plans for an impact campaign through which your project would contribute to establish laws for the preservation of the oases and their communities?

I am available in case NGOs or associations that defend or wish to protect these territories in a way or another, and would like to use my images to reinforce their message. It would be a great pleasure for me to contribute in this way. But to take on an activist role, and to defend the oases in a frontal manner, I do not think that this is the role that suits me the most. I consider myself an artist, and there is a thematic that attracted my attention, that touched me, and that I would like to share through my works. I will continue to do so in this manner; it is my way of action. I believe every person in society has a predefined role, and changes occur through collaborations, through conversations; but I cannot initiate a conversation alone. We must be many, several organizations, political figures, civil society, to bring about change. I am a messenger in a way; this is how I view my work, how I see my role. Not a man of politics who will put in place laws to change things.

Yet if there is a possibility to collaborate with organizations or people, I would do it with great pleasure.

Photography is the right medium to connect with people, tell powerful stories, and bring about change. Do you think you have succeeded, with “Waha”, in opening up the debate? Could you tell us more?

I have always used a more human approach in my work. I spend a lot of time on site to understand the environment of my subject, to capture the problematics, the challenges, etc. With “Waha”, the fact that I was on site and that I started to establish dialogue around the issue of climate change and the future of the oases with the new generation, who usually aspires to go towards the cities, is a first step towards opening this debate and exchanging around this thematic.

On a more national, or international level, I am not sure it contributes to opening up the debate. I think the debate is already open internationally; this project may allow for a different perspective, which is much more local than what we see in the media or on social media. It would help us realize that climate change is everywhere, especially in territories such as Morocco and North Africa, where we do not expect to see its impact. Today, the audience and the media are more focused on the Nordic part, with the melting of the ice, etc. This topic therefore allows for a new perspective on the global debate around climate change.

You described your work as poetic documentary photography. How do you think this poetic aspect could be more efficient and impacting than the naked reality? What about documentation? Wouldn’t you fear, when inserting the poetic aspect, to diminish the power of documentation?

This is subjective. We are more and more submerged by images, and today, what’s most important, is how to engage audiences in the beginning, so that they give us a maximum of attention to share our message.

In my approach, aesthetics and poetry are highly important. This does not rule out engagement and the sharing of information. This is my personal approach, my own vision of photography.

Photography is just a medium among others to convey messages. So if today, developing a much more poetic output will allow my subjects to reach a wide audience, why not?

In any case, I believe that this poetry attracts people emotionally. It is not just adding something poetic or artistic and claiming that I am doing something artistic. It is to create a link, to create empathy, and for people to engage without trying to understand too much. They are there, looking at something, and are drawn by an image because it touches them. This creates a link, it sparks their interest, and the message is conveyed in a much easier manner.

It is rather in this angle that I wish to subscribe my work in an artistic poetic approach. As I said, this does not prevent engagement and information, which complement the poetic aspect.

Could you tell us more about the next steps of your project?

Thanks to the ADPP program, I have completed the first phase of the project, which covered the Western part of the Moroccan oases. I am currently completing the central part, thanks to a scholarship that I received at the end of the year, and the next step would be to complete the last phase, which concerns the Eastern part of the country, with other territories and other oases that face different problematics. The aim is to publish a book and hold an exhibition on the oases of Morocco, and to contribute to the debate of the impact of climate change in Northern Africa overall.

That’s it – so I hope there will be exhibitions, or publications resulting from this work, which will reach a wide audience locally and internationally.

Seif participated in the exhibition “Troubled Waters: Images from the Arab World”, as part of the Masahat Festival for Arab Arts and Culture in Oslo, 22-25 September 2022.