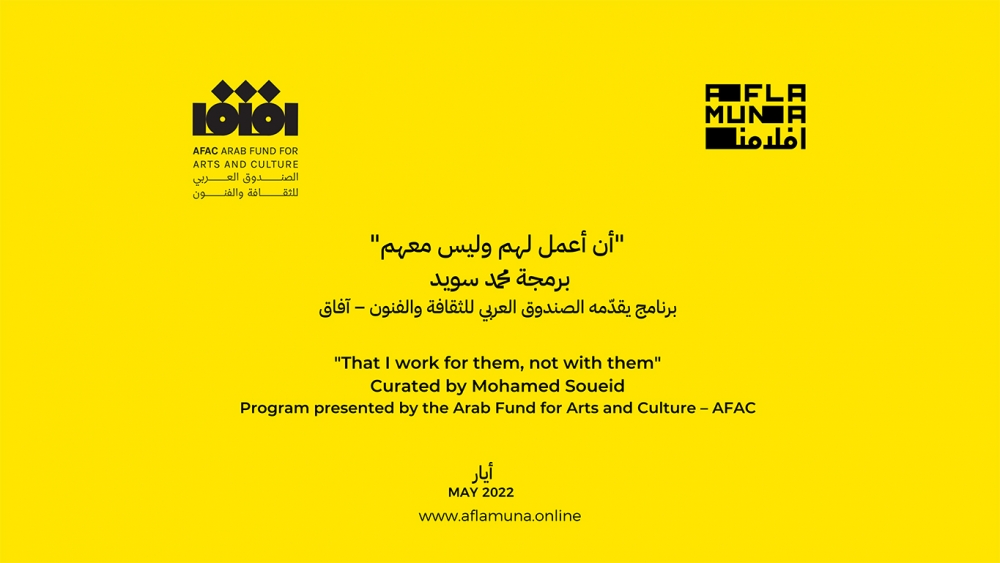 Starting today, and throughout the month of May, 15 AFAC-supported films selected by Mohamed Soueid will be on show on the Aflamuna streaming platform.

A cinema auteur, a thinker and a writer. A video pioneer, whose explorations are both deeply personal yet lay accessible alternative lifestyles, characters and subjects from the region. Mohamed Soueid, with his deep love for cinema and its accoutrements, has selected 15 fiction and documentary films for this unique occasion. One for each year of AFAC.

“I chose my list of films with my heart. There is no reason for them other than my bias toward the cinema of the second age and my hope for a new spirit that would correct my relationship with a past that I took part in producing, and perhaps in its downfall, it would help me to continue on. That the director practices his subjectivity and affirms his individuality does not mean an overall break, as he remains, more than ever, diligently in search of his self and his own narrative. This doesn’t affect his vision of a reality shared with others. The difference is “that I work for them and not with them,” as Youssef Chahine once said”, concludes Soueid in an essay accompanying his curation.

The five-week program spans across geographies, genres and themes; a true reflection of the diversity of works supported by AFAC over the last 15 years.

Erased, ___Ascent of the Invisible | Ghassan Halwani | Lebanon
Beginning with the recounting from the memory of an individual’s kidnapping during the Lebanese civil war, the film traces the present resonance of past events, focusing on the cases of those who disappeared during the conflict. Weaving archival footage with animated sequences and documentation of the artist’s interventions on the walls of Beirut, the film is a reflection on how the physical non-existence of those who disappeared continues to haunt not only the memories of those close to them but also the physical, political and administrative spaces of the nation.

You Come from Far Away | Amal Ramsis | Egypt
Imagine that you have parents but you were raised without them, and you can’t talk to your siblings because you don’t speak the same language. The film tells the extraordinary story of a Palestinian family which was dispersed because of the Spanish Civil War, then the World War II, Nakba and the Lebanese Civil War.

Amal’s Garden | Nadia Shihab | Iraq
Amal and Mustafa are an Iraqi Turkman couple that have shared a long life together in northern Iraq. When Amal decides to renovate their home after a decade of war, Mustafa retreats to the garden, where he encounters the curious gaze of his grandniece and her camera.

74 (The reconstitution of a struggle) | Rania and Raed Rafei | Lebanon
1974: Students demonstrate against a tuition increase at the American University of Beirut. For 37 days, they occupy university offices. With the Lebanese student revolt of 1974 as their starting point, filmmakers Rania and Raed Rafei direct an absorbing documentary on the core issues of revolution and democracy.

A Drowning Man | Mahdi Fleifel | Palestine
Alone and far from home, The Kid makes his way through a strange city looking for the means to get through his day. Surrounded by predators he is forced to make compromises merely to survive, his life of exile grows one day longer.

Roshmia | Salim Abu Jabal | Palestine
An elderly Palestinian refugee couple lives in a shack all alone in their eighties, in Wadi Roshmia close to Haifa city, far away from the loudness of modern life. The Israeli authorities endorse a new road project and order demolishing the shack. At the same time, they are about to go their separate ways.

Coming Forth by Day | Hala Lotfy | Egypt
''Any idiot can face a crisis – it’s day to day living that wears you out''.

Those who have fully enjoyed their bodies cannot be submissive. And those who never have? Can they survive the slavery of solitude and impotent acceptance of what they can’t change or embrace? This is the everyday story of two women taking care of their sick man.

Waves’ 98 | Ely Dagher | Lebanon
Disillusioned with his life in the religiously and culturally divided Beirut, Omar embarks on a journey into the depths of the city, which will change him forever; he struggles to not lose himself and his own sense of home.

My Love Awaits Me by the Sea | Mais Darwazah | Palestine
A woman embarks on a journey from Jordan back to Palestine to find her imaginary lover Hasan, a deceased poet and illustrator. Through his fantasy world she discovers the remnants of hope in characters living under occupation.

You Will Die at Twenty | Amjad Abu Alala | Sudan
Sudan, province of Aljazira, nowadays - When Muzamil was born, a prophecy by the holy man of the village predicted that he would die when he was 20 years old. Muzamil’s father cannot stand the doom and travels away from home. Sakina, as a single mother, raises her son with over-protection. One day, Muzamil turns 19...

It Was Better Tomorrow | Hinde Boujemaa | Tunisia
Through the hubbub of a revolution, the film follows Aida, a Tunisian woman who has to rebuild her entire life and who does not wish to look backwards. She spends her time moving from one poor neighborhood to another.

Tadmor | Monika Borgmann and Lokman Slim | Lebanon
Eight Lebanese men recall the painful years they spent in Syrian prisons. As words cannot fully describe the torture, fear and humiliation the men endured, they reenact those experiences to exorcize them from their lives. Tadmor is a story of hope and survival.

Atlal | Djamel Kerkar | Algeria
Ouled Allal is an area ravaged by war during the 90s. A constellation of beings, voices, bodies, and buildings face the test of time and live the scars of a slow war without fronts. Among the ruins, memory travels; images and sounds draw a poetic map and a psycho-geographical exploration of the place.

And Romeo Married Juliet | Hinde Boujemaa | Tunisia
What would have happened if Romeo really married Juliet?