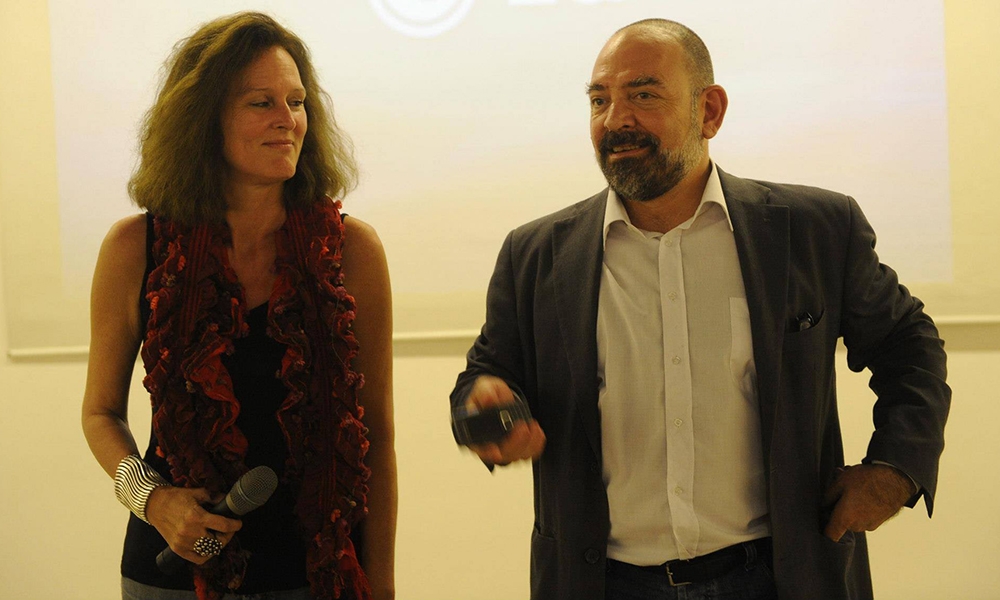 MENA Prison Forum is a space for dialogue, both physical and virtual, in "prison matters" in the East and West, as well as a meeting point for experiences, specializations, and research outputs - whether academic, literary or artistic.

How did the MENA Prison Forum start as a project?

Monika Borgmann: This research project, which we proposed to AFAC, is the result of several years of work during which a lot of efforts have been invested on different levels. We felt that we have to bring together all these elements on which we have been working for the past years, we have also been accumulating a lot of materials along with multiple partners… We also felt that the prison is a key to understand the situation in the Arab region today.

Lokman Slim: Indeed, after years of working on this topic we realized clearly the limitation of an exclusive artistic approach, the limitation of a human rights advocacy approach, and the limitation of an exclusive security sector reform approach. This feeling that there is a lacking synergy between all these approaches, represents the rationale and the philosophy of this project. We know very well that in this world it is unlikely to live without prisons. However it is becoming unbearable just to continue denouncing, and it is useless to keep playing the role of the victim. With the Arab spring, a new dynamic was initiated. For the first time, prison really took its place in the Agora, in the public space. Obviously before 2011 some countries had to address this issue; Morocco had to address it, even while Hassan II was still alive but it happened under the pressure of the international community. In Syria there was an aborted attempt, however it could not have happened without the death of Hafez El Assad. Then in 2011 it became a pressing issue and we saw clearly how the counter-spring today is relying heavily once more on the prison as a tool of suppression and oppression.
All these reasons led us conceptually to come up with a very simple idea of trying to work on setting up a space in both senses, virtual of course but which could also turn into a physical component, which deals with all these questions and tries to bring around the table all those involved, even if we know that some of the stakeholders will not be happy to be invited.

Monika Borgmann: We strongly believe in interdisciplinary projects. It is not the first time that we are launching such an initiative, but as Lokman was saying, we felt the past limitations of a purely human right oriented approach, or purely artistic or purely security-oriented, so in bringing all these actors together, we profoundly believed that a new dynamic can emerge from this.

My question here would be, a project of this scale and a project that is this interdisciplinary, could not generate the only desired outcomes as raising awareness and advocating. So do you have any foreseeable results and goals which you want to result from this?

Lokman Slim: Since it is a somewhat megalomaniac project, we would be very happy if we succeeded in engraining the legitimacy of a regional forum dealing with these issues and we know that we need to be very careful about our expectations. But let me delve more in this megalomaniac approach: why not have finally something like a report on the state of prisons in the Arab world, on the one hand aggregating what human right activists are doing, trying to sense what artists are doing, trying to have a look at what efforts are being done in terms of security sector reform… actually saying clearly that it is not a factual problem which pops off and on and then off again. It is a long-standing problem, on the one hand it has to do with our political culture, but also we cannot continue saying that it is inscribed in our genes. So there are also solutions, which are being tested; sometimes they fail, sometimes they get positive results. Keeping the debate at a certain level, I would say if we succeed setting a standard for the debate, we would be very happy and perhaps others could take on from what we did.

Lokman Slim: Of course, it is a very relevant criticism which could be made to this approach, and we know that perhaps we will never succeed in being fair towards all the region we seek to cover. However, as we do not really believe in country-based solutions, and as we believe that the cultural dimension of the problem is an overwhelming one, we think that any shortcomings we could face in implementing the project will be offset by the idea that looking for a country-based solution is not a solution.

Lokman Slim: This explains exactly why our approach from the beginning tries to widen the number of stakeholders. We are aware that we will never be able to reach out fully to everyone and therefore we believe that we should take advantage of what others are doing on a more specific micro-level.

Monica Borgmann: We have been building up, in the last years, a quite extensive network with other organizations and this gives us also some confidence to have a certain outreach. This network includes a web of former detainees.

Lokman Slim: Commenting on the size of the network, the quantitative approach is not the most important. What UMAM did and what it strives to continue doing is exploring the possibilities of setting templates in a way. So what we are trying to do is to try to engineer a template rather than doing all the work.

How would you carry on the work? Have you faced any challenges, considering that most of the subjects you are working around are prisoners, which is predominant in repressive regimes? How are you able to work on that topic under repressive regimes, what challenges do you face?

Lokman Slim: There are several differences between oppressive regimes in this area. The question pertains as to how to navigate in all these different situations. Obviously if you tell me that now we will go to Cairo and start making interviews with people, it will never work out. So if you take the Egyptian example, for instance that we are reaching out to people who are already working on this, who are not necessarily Cairo-based or Egypt-based, if you are talking about Gulf states, which are another example where the issue prison is getting more and more complex as the oppression is getting more elaborated. Again we are trying to bring on board of our work, those who are working specifically on countries or on issues, sometimes we need to toy with the wording and sometimes we need to present the project as one of just historical interest.

Lokman Slim: Our idea was that those actors or artistic practitioners or artistic human rights activists need to be aware of this limitation and I think that one of the aims of the project is to bring these practitioners to a kind of self-criticism or at least to a certain level of awareness so that they stop just living in their tribe in a kind of autistic mode. Will it be successful? I believe it could make sense to raise these questions and to spread them, and when we insist that we would like to always involve state actors, we believe that it is another way of introducing the questioning everywhere.