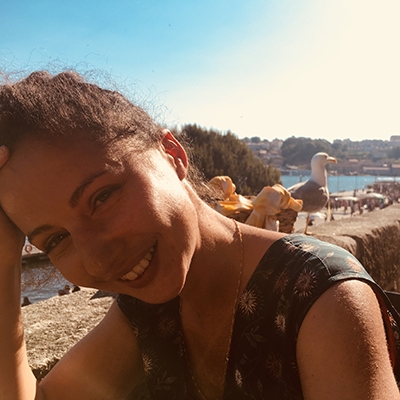 [email protected] | http://dorotheemyriamkellou.tumblr.com/
Algeria
Dorothée-Myriam Kellou is a French-Algerian filmmaker and journalist.      Trained in documentary filmmaking in Ateliers Varan (France), she is completing her first feature film, In Mansourah you separated us, on Algerian memories of forced resettlement by the French military during the Algerian war of independence, departing from her own father oblivion/memory of this silenced history. The film was awarded the prize “Brouillon d'un rêve" at SCAM, first prize for historical film projects at rendez-vous de l'histoire de Blois, first prize in rough cut workshop at Cairo International Women’s Film Festival.     Dorothée-Myriam also works as a journalist. She uncovered in the French newspaper Le Monde in June 2016 the scandal of the French company Lafarge indirect funding of the Islamic state group during the war in Syria. Her work was rewarded with the TRACE International Prize for Investigative Reporting, which recognises reporting that uncovers bribery and transparency in the business world. She was also a finalist of Samir Kassir Award for the freedom of the press in the Arab world and of Albert Londres Award, the highest award in French journalism.    She graduated as a Fulbright student from the Master of Arts in Arab Studies, Georgetown University, Washington D.C. Prior to studying in the US at the graduate level, she has studied political sciences in France and Arabic in Egypt.
related projects
In Mansourah, You Separated Us
• AFAC Documentary Program  • 2018  • Algeria